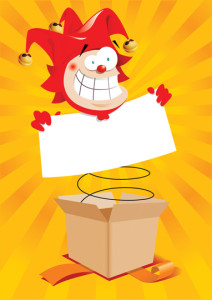 Harvard historians recently uncovered a never-before-seen letter found among the writings of the late Dean of Harvard Law School and founder of the Socratic case method, Christopher Columbus Langdell. The letter, which is dated April 1, 1882, appears to outline his whole scheme in which he conceived the entire method of law school instruction as a ruse to fool a rival professor at another school.

Apparently, Langdell devised the whole curriculum, which is now familiarly taught in U.S. law schools, for no purpose other than an elaborate practical joke.

“We are flabbergasted,” sighed a dean of a local law school. “I guess the whole idea of teaching by asking questions really is kind of silly when you think about it,” admitted a first-year property class professor (finally, after all these years).

For decades, law students have tediously struggled to understand how to apply the rule against perpetuities in the law school classroom, only to discover its utter irrelevance to the modern daily work of an attorney.

“Who knew?” pondered one notable law professor, “that our theoretical curriculum—one that is completely bereft of practical knowledge—could backfire?” “What’s next? The Rule in Shelley’s Case becoming outdated?!” feared one particular dean who recently celebrated an empty, four-spot boost in the U.S. News and World Report annual rankings of law schools. “We just worked really hard to leapfrog over three rival law schools [out of 200], and now we might have to change up our whole curriculum,” the esteemed professor lamented. “ Next they’ll tell me that these career development office salary statistics aren’t right,” said another exasperated law school dean upon learning of the questionable origins of the profession’s long-heralded curriculum.

Langdell’s hilarious, long-lasting April Fools curriculum-based prank has nearly crippled our profession as we clung to outdated pedagogical concepts for more than a century past their usefulness—but to be fair, that truly is the mark of a great prank. Thumbs up Dean Langdell!

Further highlights of the Langdell plan include:

“It’s a real wake up call,” said the law school dean who never previously questioned the value of the system. “We have to re-think everything,” he notes, gulping. “We will never be able to keep charging nearly $50,000 a year for tuition after people find out it is a joke.”

Langdell’s ruse was apparently so effective that it transformed the way we educated a profession for nearly a century and a half. Whether it was truly meant as a joke or not, we still teach law school the same way we did in the late nineteenth century. Law schools rarely even teach cases that old in today’s classroom, yet the educational format persists.

To gauge opinions on all this, I tried to interview an ordinary member of the public, but she was hurriedly rushing to court to file a pro se brief because she cannot afford a lawyer to represent her.

If you think the attorney-client relationship suffers as a result, you should hear about how some law school faculty are taking it. One longtime, dorky property professor was so upset over the prospect of his teaching job being at risk that he formed an obscure musical act. Professor Zeitgeist formed the self-proclaimed “geaser hip hop” crew, The Remaindermen. This group has a ton of ironic talent, which will send hipstar sales surging through the roof. The professor himself now goes by Easement E. His wife became especially concerned when the professor tattooed “O 2 A 4 LIFE” across his chest. Now, he just raps about defending his vast blackacre with a huge bundle of sticks. It’s a little hard to watch, but the music is great so no one stops him.

By Keith Lewis, a Denver-based litigation attorney. He can be reached at keith@freelancelegalcounsel.com.