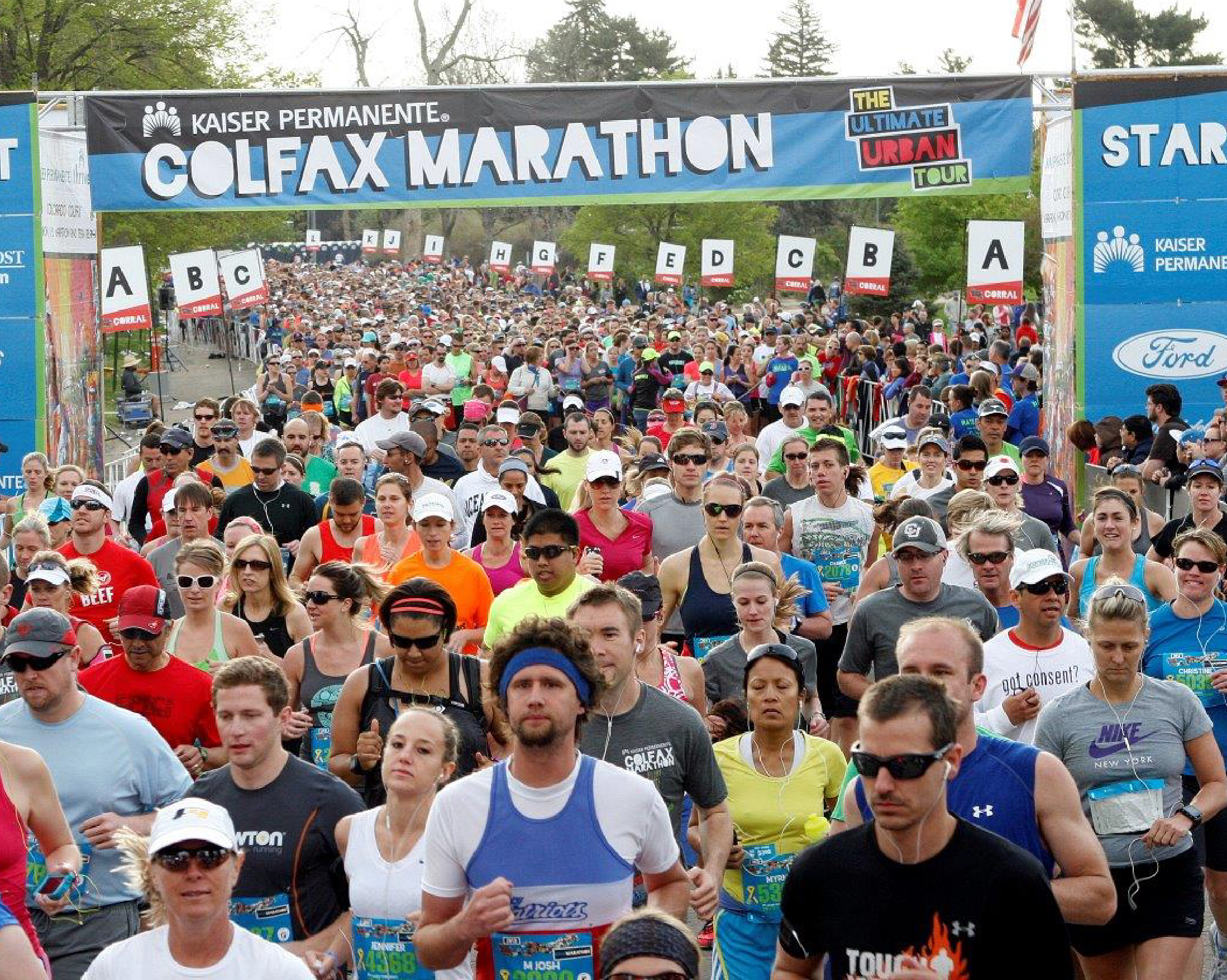 n the middle of May, thousands of people will take to the streets of Denver, Lakewood and Aurora. They will move from east to west, from north to south, through residential neighborhoods, business districts, civic parks, even Mile High Stadium and the Denver Zoo. Some will show up to win. Some will be there to give back. Some will seek to prove something to themselves. All will be there to run.
This spring will see the return of the Colfax Marathon to the Denver metro area from May 19-20. Now in its thirteenth year, the Colfax Marathon is the largest marathon weekend in the Rocky Mountains, the only marathon in Denver, and the largest overall running event in the city. In 2017, more than 19,000 participants competed in one of the seven Colfax Marathon race events, including a half marathon, an urban 10-miler, and a 5k, in addition to the 26.2 mile main event.
In addition to being a massively popular event, the Colfax Marathon is a major driver of charitable giving and fundraising. The Colfax Marathon Partnership, the nonprofit 501(c)(3) that manages the marathon, partners with more than 200 other nonprofits each year to raise money and awareness, for causes ranging from disease research to children’s education to animal rescue services. Runners can choose to support any of these charities through sponsorship. The partnership program is one of the largest in the nation (second only to the New York City Marathon), and since 2014 Colfax Marathon partner charities have raised more than $2 million through the efforts of runners, volunteers and donors.

In addition to facilitating nonprofit donations through sponsored runners, the Colfax Marathon Partnership itself donates more than $100,000 to charity each year. Some of this money is presented as a prize to winning teams, who can then select the particular charity to which they would like the money to be designated.
Competing for a share of this charitable prize money — as well as physical awards, bragging rights and other substantial, if intangible, perks — are the participants of the Corporate and Government Relay Divisions. While most runners compete as individuals, the Colfax Marathon Relay is also Colorado’s largest corporate challenge event, in which 5-person teams from over a dozen industries compete with their coworkers against their professional cohorts. Winning teams are selected within each industry as well as overall, and 1st, 2nd, and 3rd place winners all get prize money to donate to charity. The anticipated industries for 2018 are Accounting, Construction/Engineering, Consumer Services/Products, Energy/Environment/Geology, Financial Services, Healthcare, Hospitality, Legal, Manufacturing, Nonprofit (non-healthcare), Professional Services/Products and Technology/Telecom/Broadcasting.
In 2017, 14 law firms participated in the Legal division of the Colfax Marathon Relay, representing a total of 30 five-person teams. Participating firms included Davis Graham & Stubbs, Sherman & Howard, and Brownstein Hyatt Farber Schreck, who each registered multiple teams. Relay participants each complete a portion of the total marathon before handing off a baton to their teammate to complete the next portion. Teams can be coed, male, or female.
DGS partner Peter H. Schwartz has served on the Colfax Marathon Board of Directors since 2013. He speaks enthusiastically about the positive effect that participation in the marathon seems to have on the overall office environment and intra-legal camaraderie, pointing out that all of the Legal division teams generally meet up together in a firm-sponsored tent in the ad hoc Marathon Village to meet and socialize with the nominal competition. Schwartz emphasizes that firms can form and register both “elite” teams of serious runners, as well as “recreational” teams that are less competition-minded, and in either case there will be benefits to the participants, the firms they work for, and the charities they sponsor. Of course, only the winning team in the Legal division is granted the prestigious “Sole of Law” trophy — a bronzed running shoe donated by former Colorado Supreme Court Chief Justice Michael L. Bender. 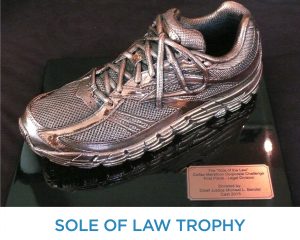 The current bearers of the shoe/award are Sherman & Howard, which participated in the race for the first time last year and is now defending their first place title in the Legal division (and third place overall ranking among Corporate teams.) Sherman & Howard attorney Christopher Harrington was a member of the winning team and has only positive reports of the experience. Like many attorney participants, he thinks that participating in the marathon slots nicely into the wellness objectives of an increasingly health-minded legal culture. Sherman & Howard supported teams and individual runners at all levels of the Marathon events in 2017. “It’s nice to have a physical challenge, in a team environment, across practice areas — it lets you meet and compete with other firms, as well as people within your own firm that you might not have much interaction with otherwise,” Harrington enthuses. He also points out that the variety of events means there is something for everyone, regardless of skill level or physical commitment, leaving “No excuse” not to participate if the interest is there.
With multiple scenic routes through the city and surrounding environs, the chance to raise money for charity, and the opportunity to meet and connect with all sorts of people, the Colfax Marathon is an unmissable event in the Mile High City. Even those who don’t participate athletically can help out by cheering on runners or volunteering for a variety of much-needed support roles. For attorneys, the Marathon and Marathon Relay present a great way to get out there among the great Denver legal community, get involved and give back — in sneakers and shorts instead of suits and heels.

For more information about the Colfax Marathon, including registration and the list of charitable partners, visit http://www.runcolfax.org. Marathon from May 19-20, 2018. D 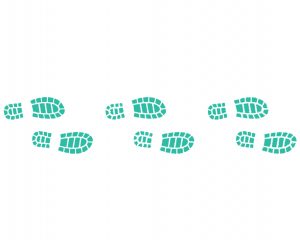