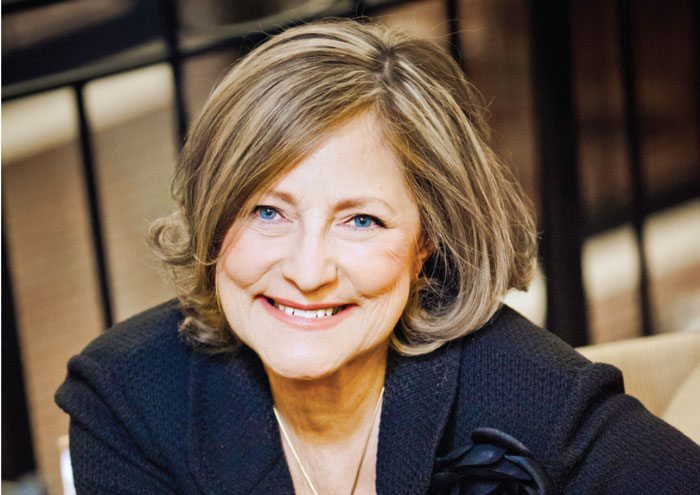 I’m here today with Professor Joyce Sterling at the Denver University Sturm College of Law to talk about whether a glass ceiling exists for women in the practice of law in our community. And if so, how bad is it?

Welcome, Professor Sterling. What is your background in the practice of law?
I am a Ph.D. in Sociology. And my specialty is Law and Society and studying the legal profession. I received my Ph.D. at the University of Denver and have spent most of my career here. I also spent time at Stanford Law School, taking traditional law classes. And I teach legal profession and also scientific evidence and history of American law. I’ve been a professor more than 35 years.

In your experience, is there a glass ceiling for women practicing law in Denver?
I would say the glass ceiling exists. It appears to be as strong as ever in the Denver area.

Does it exist in a specific area such as, employment, salaries, or leadership opportunities, or is it pervasive in all three areas?
I think it is pervasive in at least two of the three. Women are being hired out of law school in equal numbers as men in private practice law firms. So that has definitely changed. But I think there is still a gap in income and there is a gap in terms of promotion, particularly to partner or to being part of the management committee.
I have been studying the legal profession in Denver since about 1995. We did a study—my colleague Nancy Reichman and I, that was supported by the Colorado Women’s Bar Association—that looked at income disparity among Colorado lawyers. When we first started studying the gap, women were making 59 cents on the dollar. It’s gone up slightly since then, but not as much as one would expect.
I have been part of a national longitudinal study of lawyers tracking the class of 2000. We have followed up with three surveys and also done a subset of in-person interviews, talking to people around the country. And I find the same types of issues arise in the national study as in Colorado.

Is your research published anywhere?
Yes. Most recently, I did a retrospective over the 20 years of research I’ve done that is published in “The Florida International Law Review,” called: “Navigating the Gap, Reflections on 20 Years Researching Gender Disparities in the Legal Profession.” (It’s volume 8, no. 2, spring 2013). I also have a new article in “The Indiana Journal of Global Legal Studies.” I’ve also published on the gap in income with one of the top sociology journals, “Social Forces.”

I read in your article that roughly 48% of law school graduates are women. Is that down from a few years ago?
Yes. And over the last three or four years, there’s been a decline in the number of women applicants to law school. I mean, there’s an overall decline of applicants, but women appear to be declining slightly more than men.

And you gave a percentage a little bit earlier about the wage disparity. What is it currently?
After the J.D. study, where I followed the same group of people over time, we found that after only two to three years of practice, there was a 5% gap. After seven years, there was a 13% gap. And now after 12 years, there’s a 20% gap overall. 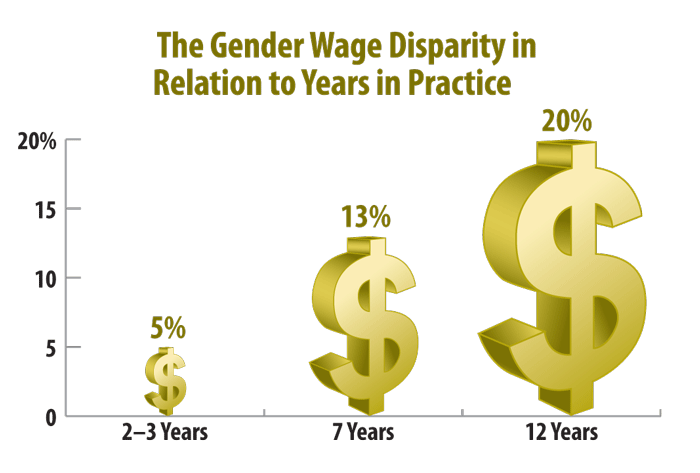 To what do you attribute that widening gap?
I don’t think it’s a conscious decision to pay women less. I think it’s something about the gendered nature of organizations. And I would say law firms fit in that category of being a gendered organization (containing a distinction between male and female, patterned by way of advantages and disadvantages, identity, meaning and control).

If I’m an employer and I want to be sensitive to this issue, what are some of the things I can do to try to address this problem? What tips would you give?
One of the things research suggests is that organizations that make the criteria for hiring, for promotion, for pay raises, or even bonuses very transparent actually have fewer problems with gender disparity. Law firms tend to operate without a lot of formal rules as organizations. And sometimes that’s exactly what leads to unobserved bias.
I think if employers actually sat down and tried to capture what a lawyer would look like who is going to be promoted to partner, it would make them be very explicit about the kind of behaviors that they’re looking for. My research indicates that men tend to be judged based on potential and women are judged based on actual accomplishments, and that builds in some disparity.

What about leadership opportunities? Is that gap widening as women progress and become more senior in the practice?
Actually, if you look at some of the data from the National Association of Law Placement, as well as the National Association of Women Lawyers, the proportion of women who are partners has pretty much remained flat since 2000. It’s approximately between 15% and 19%, depending on the city you’re talking about, but it hasn’t budged at all.
No one is breaking through that ceiling into partnership. The After The J.D. Study results show that men are much more likely after 12 years to have made it to equity partner. And women are more predominant in the non-equity partnerships.

What is it about the structure of a typical law firm that sets that up?
I think some of the individualistic benchmarks of achievement, like having individual billing hours. Even though people tend to work in teams, firms still rely on individual measures of achievement. I recently read about some large law firms that are beginning to create measures in which they judge people based on how well they work together as a group and what they accomplish. That would be a very big change for law practice.

What is it about the billable hour measuring stick that is making it more difficult for women to achieve those marks?
Well, in order to bill enough hours for a law firm, you have to get enough assignments. And sometimes those assignments are not distributed equally. So, if women are on the low side, or they don’t get the major assignments, it will be harder for them to bill the hours that the firm requires.
Usually that means you want to have mentors. But we still find problems with that—mentors like mentees who are similarly situated—so men like, and are comfortable mentoring, other men. Women, perhaps, are comfortable mentoring other women. There’s actually been literature to suggest that women, particularly in law practice, haven’t played a major role as mentors to junior women.

What can we do for those future employers now so when they get into leadership positions, they are more sensitive to the issue?
Well, one of the things I do when I teach Legal Profession—which all students are required to take—is that I actually give them some of the results from my research, so that they have a sense of what’s going on in practice right now.
I also try to advise them on how to go about thinking of interviews—that they need to ask for what they want as opposed to saying, “Oh, they offered me a job and I’m just happy to get hired.” That could be great, but you may not get what you actually want and then end up finding there’s a barrier to moving up.

How should those in the legal profession move forward from here?
In our most recent article, we’ve recommended that the women’s bar associations recognize the gap or the glass ceiling as something that they need to organize around — in terms of how they are going to attempt to get rid of it and the kinds of activities they can do. I am referring to activist movements.
The other thing I did for this article was to look at the Rules of Professional Conduct, to find out whether they contain something that would help. Successfully, I found that both Minnesota and New York have passed an 8.4(g) rule that actually holds the law firms responsible for not discriminating by gender or race or other categories.
I haven’t yet proposed a similar rule in Colorado, but recently a colleague and I talked about the idea of writing an article on it.

Joyce, thank you for your time. It’s a very challenging and interesting issue. And hopefully this article will help sensitize our readers a little more to it.