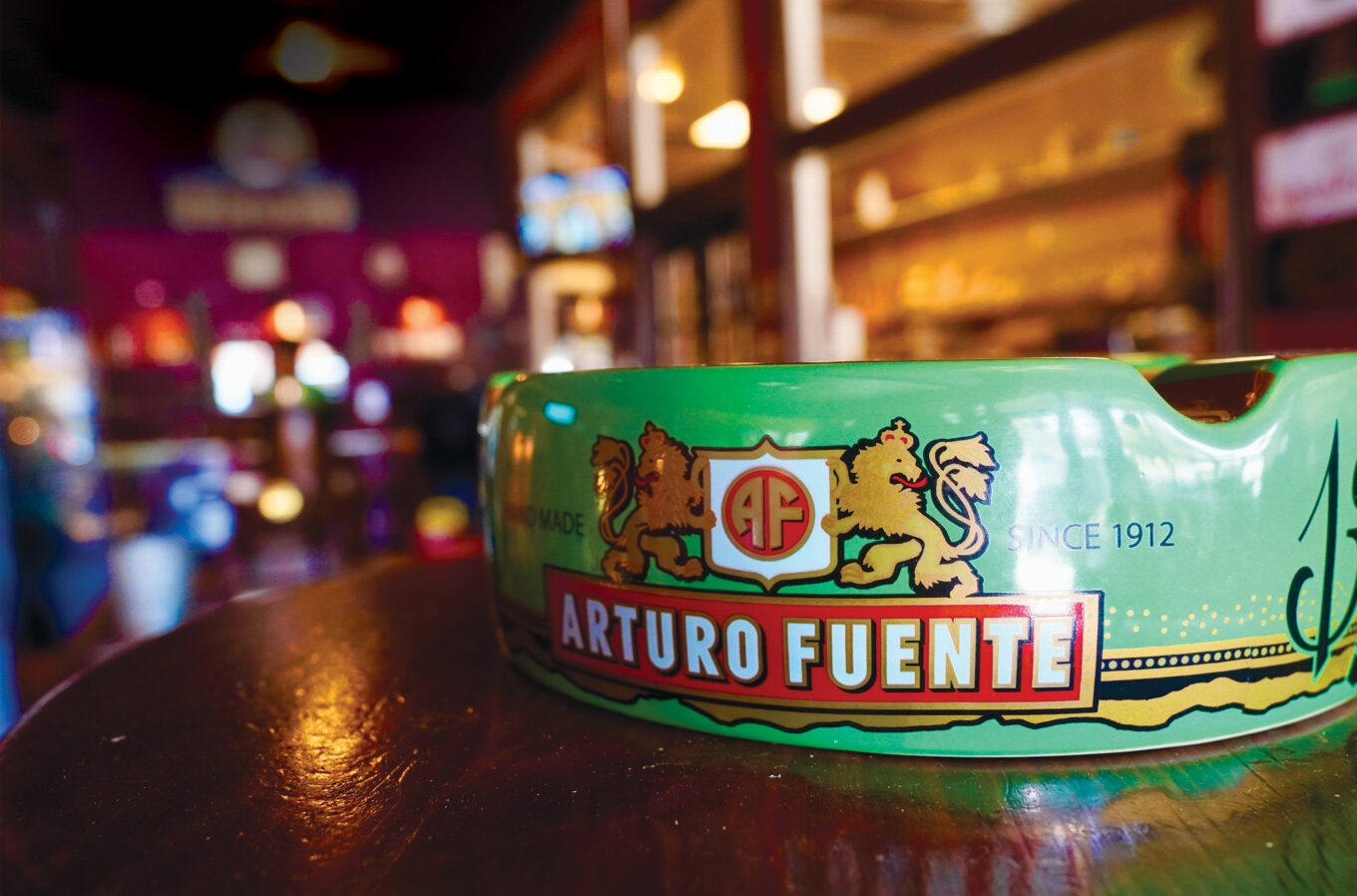 It’s springtime in Denver. Imagine a walk through the neighborhoods of downtown, through the haunts and hollows of her streets and alleyways. There you catch the aroma of something old, inviting, and eternal. The scent halts you in your tracks. The cigar smoke from somewhere nearby triggers something visceral and instinctual, a memory forgotten or one yet to be made. In scent and spirit, they are the memories of our fathers and grandfathers. The smell of history beckons you in to pursue your own pleasures and there, amongst the barons and bricklayers who built the Mile High City, share in the stories of all that is rich and good and timeless. It is the turn of the century. It is today.

Thus, take a walk on your own self-guided Denver cigar tour and taste a different flavor of Denver. Savor its past memories, relish its present glories, and create the future stories yet to be written.

Cigars on 6th — Where Everybody Knows Your Name

Walking into Cigars on 6th you are immediately transported to the world of the quintessential cigar shop. It feels like the perfect neighborhood bar, one that you don’t want to leave.

The ambiance is visually stimulating. Dark red hues, black wood, and handsome cabinetry set the mood and excite the palate. The walls are richly adorned with an engaging mix of cigar art, vintage photos of old cigar rollers, antique tobacco advertisements, and, adding to the neighborhood flair, photos of regular patrons and local celebrities who frequent the shop. A deer head is displayed with a cigar in its mouth — a stag with a stogie. Included in the mix is an incredible collection of cigar label art — that’s right, pictures made from varying cigar labels. And they are not just any pictures: Avalanche hockey, The Last Supper, a Spanish bullfight, the Constitutional Convention, and that timeless classic Dogs Playing Poker.

Its two intimate circular seating areas boast a combination of antique leather chairs and wrought-iron seating, invoking a Scottish royal antechamber. Collectively, the environment is both Victorian and masculine at the same time, perfectly suited to enjoy the perfect cigar, of which the patron will have no trouble finding. Cigars on 6th boasts up to 700 different facings (types of cigars) including boutique, specialty, and hard-to-get cigars, so the customer can truly get almost anything they want from the two separate walk-in humidors.

Its selection and service, both exemplary in every way, will have you coming back for years to come. Cigars on 6th makes it easy to be at home in your own neighborhood cigar lounge.

Capitol Cigars — The Oasis in the City

If you are in the Capitol Hill neighborhood or find yourself doing business under the golden dome, the aptly named Capitol Cigars is only a short walk up Colfax but feels miles away from it all. Like an oasis in the desert, this inviting shop provides an ideal getaway when seeking a good smoke and the solitude that comes with it.

Capitol provides a fantastic array of cigar selections in its well-stocked humidor and provides a wonderful space in which to enjoy them. There is an open and spacious seating area where you can browse cigar and tobacco trade magazines. Hardwood floors and high palm leaf ceiling fans give it an old-world feel of Latin American simplicity, authentic and honest.

And like any oasis, there are beverages to imbibe. In the spirit of Colfax’s continual evolution, providing something for everyone, Capitol has added a casual bar for beer and cocktails. This quiet haunt by day awakens at night as a destination for those taking in a show at the Ogden Theater next door or wanting to experience the nightlife on Colfax, cigars allowed. “Smoke em’ if you got em’” rings true at Capitol Cigars.

It’s a perfect spot for a cigar over a long lunch, a sit-down break from exploring Colfax, or a happy hour and cigar after work. Whatever time of day, numerous happy hours can be spent at Capitol Cigars.

Lodo has had its share of cigar bars, especially during the cigar boom of the mid-1990s when Lodo and cigars both collectively rose in prominence. Today, Lodo’s go-to cigar shop is Palma’s Cigars and Bar. The quirky, eccentric atmosphere is akin to a Boulder/California vibe. Its full bar serves an impressive selection of Colorado wines and specializes in the classic cocktail. With multi-colored glass lamps descending from the ceiling at different heights and a minimalist simplicity similar to a 1960s bungalow, this is not your grandfather’s smoke shop.

The red brick dwelling on Larimer is not unlike so many of the studios, bars, and galleries in the area, but the novelty of Palma is that it is a working art studio and its product is cigars.

Clay Carlton is the master torcedor (Spanish for cigar roller), who apprenticed himself to the art in an effort to preserve the timeless magic of hand rolling cigars. Carlton personally crafts all of the cigars for sale at Palma. With seven different tobacco blends produced in all the standard cigar sizes, a custom-made cigar awaits patrons at the Palma. Carleton can be found at the front of the store most days rolling, cutting, stripping, and binding tobacco as it magically evolves from stem to smoke. Patrons can watch the artist at work in his studio, educate themselves on the cigar making process, and then taste the fruits of his exquisite labor. While smoking cigars is an art form of its own, the growing and production of cigars is of course even more refined, taking years to transform from seed to shelf. The process is as sublime as the product and at Palma, cigar aficionados can visit the artist in residence.

Grab a Palma cigar on your way to a summer ballgame and walk the storied streets of Lodo. There, you can almost hear the workers of the old warehouse district who eked out a living by the sweat of their brow and the skill of their hands, echoing the adage of Woodrow Wilson’s vice-president Thomas Marshall in saying “What this country needs is a good five-cent cigar.” Many of which were undoubtedly smoked in those long-since defunct, cavernous spaces of another era.

If classical elegance is your desire, then punch your dance card with the Churchill Bar at the Brown Palace. While the Brown is an icon in Denver, the Churchill Bar is a smoking lounge that provides its own rich experience. It is a special place where cigar aficionados, new and old alike, come to make memories or commemorate traditions. Whether it be your virgin visit or a return as an old friend, to visit the Churchill is to create your own timeless piece of history.

And the setting is ripe for such moments. Wingback leather chairs, rich oak paneling, elegant carpeting, tufted leather chairs and sofas (for group socialization), and forest green and gilded wallpaper make the Churchill Bar the classic cigar club of elegance and sophistication.

Adding to the ambiance is a five-star staff of the highest quality. They quickly learn your name and the flavor of your cocktail, whatever that may be, including specialty and high-end bourbon, scotch, and wines that simply cannot be found elsewhere. They keep a variety of cigars on hand in their humidor, although most come for the spirits and grandeur and bring their own cigars.

Most of the patrons, myself included, have a history here. It is where I called my friends and family, telling them about my first law job with a celebratory smoke of a classic Romeo y Julieta cigar. Like so many others, I relished the glorious anticipation of the not yet seen, reflected on how my life was about to change, and was humbled by the journey that allowed me to take my place and be part of the Churchill. It is a place where people want to belong, a place where every man can be a king. Or, even more apropos, a sultan.

While there are a few framed pictures of the bar’s namesake, the irascible prime minister who saved England from the Nazis then lost his next election, the marquee piece at the Churchill is the painting “The Sultan’s Delight.” It was commissioned for the hotel at its opening in 1892. The grand painting shows a bearded Ottoman, one of wealth and power, sailing through the Bosphorus. He is immediately surrounded by four women while others near the stern float ethereal into the Turkish sky with Istanbul’s mosques and minarets framing the background.

The irony is easily lost among the opulence. The keen student of history may observe that the most dominating feature in the Churchill Bar is the glorification of the Ottoman Empire, responsible for Churchill’s greatest military defeat while he was First Lord of the Admiralty, the 1915 battle of Gallipoli in World War I. In other words, at the Churchill Bar just as in 1915, Churchill remains secondary to the sultans.

Yet, for the classic smoking club, the Churchill Bar is second to none.

The writer and female cigar smoker George Sand wrote in 1867, “The cigar numbs sorrow and fills the solitary hours with a million gracious images.” As we emerge from the darkest of winters and awaken into a springtime of a new era as COVID subsides, Sand’s words ring especially true. We can smoke for what we have been through — endurance and loss. We can smoke for a better future, for aspiration and accomplishment. In the cigar bars of Denver, there are a thousand stories that rest in the humidors and are told by their carriers in leather chairs, their secrets ascending to the heavens in curls of blue smoke. As Colorado reopens, there are a thousand more tales waiting to be created, adding to the tapestry of all that makes Denver what it is: past memories, present glories, and future stories yet to be written.