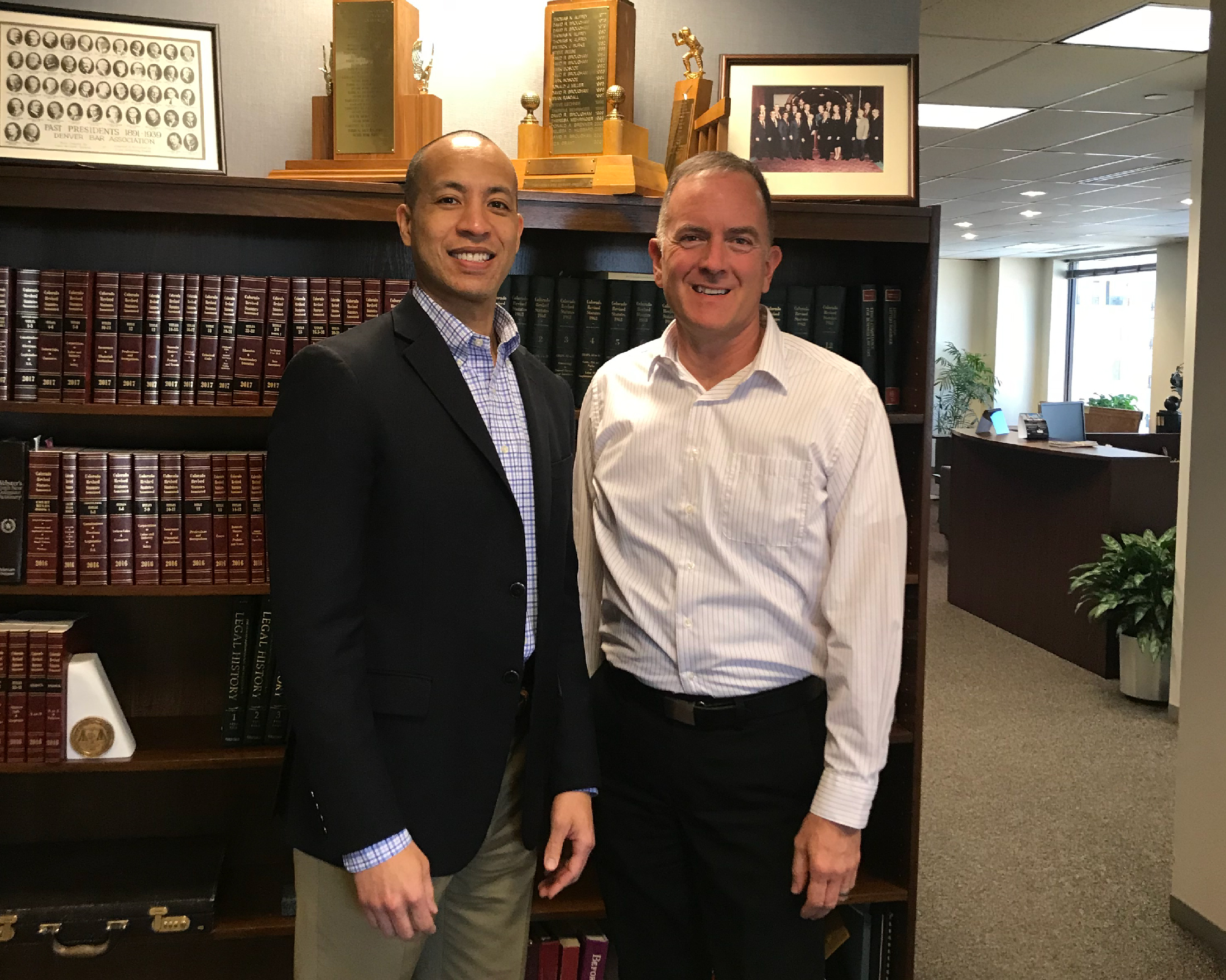 ecently, I met with Patrick Flaherty, the Executive Director of the Denver and Colorado Bar Associations. Patrick has served in this role for the last three years and has been influential in the ongoing evolution of both associations. As you will read, Patrick is keenly aware of the changes in the legal industry and is focused on ensuring that the DBA remains a tremendous resource for our members. Learn more about Patrick and his vision.

HARDY: Would you tell us about your personal background?
FLAHERTY: I grew up in Littleton, Colorado. I attended The University of Denver for undergrad and law school, and then Regis University for a master’s degree. I love Colorado. I love Denver. It’s home. I can’t imagine living anywhere else.
HARDY: Tell us about your professional background.
FLAHERTY: I practiced law for nine years and made partner at the firm now known as Lewis Roca Rothgerber Christie. But I left after making partner to go back to school to get a Master of Nonprofit Management with a fellowship from the Colorado Trust. I’ve worked in nonprofit management for more than 20 years initially as the Executive Director of Project Angel Heart, then as the Director of Policy Advocacy Programs of the Gill Foundation. And for the last 3 years at the Denver and Colorado Bar Associations.
HARDY: How did you come to apply to be executive director of the Denver and Colorado Bar Associations?
FLAHERTY: I was working on a consultant basis for several civil rights-related grant-making foundations, not really looking to do something different. I happened to see the job posting for this. I initially ignored it, but woke up in the middle of the night thinking there’s a calling here. I never thought the two sides of my career could come together in a job like this. I needed to learn more. I needed to apply. And I did. Side note: I almost missed the initial screening interview because I was out of the country. But for the persistence of the headhunter, I wouldn’t be here today.
HARDY: So it sounds somewhat serendipitous?
FLAHERTY: I think so, yes.
HARDY: How is it that the Denver Bar Association and Colorado Bar Association have the same executive director?
FLAHERTY:The story goes that sometime in the early 1950s, the then all-volunteer Denver Bar Association decided that it needed a half-time secretary. The then all-volunteer Colorado Bar Association heard that and said, “so do we.” They decided to go in together and the rest is history. This is the only arrangement like it. It’s the envy of other bar associations across the country. We’ve had several delegations here looking at our model. They see the beauty and efficiency of it, but they don’t know how to get to it. We just grew into it.

HARDY: What are your primary duties as executive director of the DBA?
FLAHERTY: As a sophisticated and complicated organization with many stakeholders, it’s really to help set direction and manage the staff that actually carries out the work.
HARDY: How many staff members are there?
FLAHERTY: Between the DBA and CBA, we have 41 staff members. Most staff split their time between the two, but overall about a third of our staff focuses on DBA activities. I will say, though, this model lets us hire specialists in different areas that the DBA alone couldn’t otherwise afford and there are many efficiencies. Our dues are among the lowest in the country.
HARDY: Can you give us some examples of the stakeholders you reference?
FLAHERTY: Absolutely, members first and foremost. We’re nothing without them. We do have, I think, a broader obligation to the legal community, including the bench. And I think we also have a role with the public and representing the profession.
HARDY: What is the most rewarding part of your job?
FLAHERTY: It’s somewhere between seeing a member discover and use our services that they didn’t know existed and looking at, for example, the people we serve through Metro Volunteer Lawyers, our flagship program, where we’re helping the indigent with some modicum of justice that is otherwise often beyond their reach.
HARDY: What is the most challenging part of your job? Besides dealing with the president!
FLAHERTY: That’s not the most challenging part of my job by any means! I think it is keeping us focused with all the changes that are occurring. I’ll leave it at that.
HARDY: What are your priorities as the executive director of the DBA?
FLAHERTY: I think my first and foremost priority is to serve our members and just stay relevant for them. Everything flows out of that. Managing the budget flows out of that, providing programming flows out of that, managing a staff flows out of that. But first and foremost, it’s being relevant to the members.
HARDY: Where do you see the DBA in the next 10 years?
FLAHERTY: The DBA is fairly well-positioned compared to its peers across the country. And I think we have room for improvement. With our strategic plan, we’re on the cutting edge with innovation compared to other metropolitan bar associations. We’re in a thriving economy, so I’m optimistic that the DBA can weather the winds of change out there and actually grow and thrive and help our members more.
HARDY: What would you like members to know about the DBA that they may not know?
FLAHERTY: We have far more programs and services that could be of help to them if they knew about and accessed them. And some of that is our fault. We need to do a better job of clearly communicating our value to our members. A great resource is the redesigned and rebuilt www.denbar.org.
HARDY: What advice would you have to newer or younger members of the DBA?
FLAHERTY: I would say, “jump in.” We’re told by more senior members of the DBA that the greatest value is the camaraderie and peer networking. But our market research also tells us it’s one of the hardest things to sell to a new or young attorney. It’s not that tangible to see initially, so you have to jump in to find it, but it’s absolutely here.
HARDY: Where does diversity fall as a priority for the Denver Bar Association and for you as the executive director?
FLAHERTY: For me personally and for the Denver Bar Association, diversity and even beyond that, inclusivity, is absolutely one of our highest priorities. Officially, the Denver Bar Association adopted it as one of its four highest values and a key element of a long-term goal. I could give you the business reasons for that, and there’s plenty of research to indicate why there’s a value-add to diversity and why you get better decisions as a result of diversity. I don’t like making those arguments because I think the only argument that ought to be made is that it’s 2018.
HARDY: Patrick, lastly, is there something that you wish I would have asked you or anything else about the DBA or your role that you’d like our members to know?
FLAHERTY: Thank you for not asking me to evaluate you.
HARDY: Best president ever, huh?
FLAHERTY: Actually, up there. No, I can’t think of it today. D