The Denver Bar Association Seniors Committee Roast of Bennett S. Aisenberg provided guests with an evening of unforgettable wit and celebration at The University Club, which, like the DBA, boasts a history that extends back to 1891. Attracting an assembly of 90 attendees, Ben (as he prefers to be called) distinguished himself as quite the unassuming celebrity. The misty chill of the outdoors worked to usher everyone into the oaken splendor of The University Club, where there were cocktails to be had and conversations to be kindled. As if on cue, the gathering proceeded down the red carpet and into the “Great Baronial Hall” of Temple Buell fame. 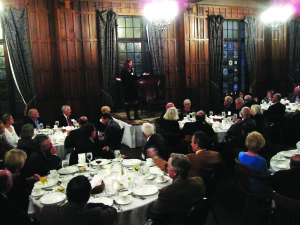 The poached pear salad and piping hot main courses built up an appetite for a similarly well-seasoned Roast of words. Without further ado, Chuck Turner, acting as emcee, introduced the distinguished “Defendant,” who took a seat in the chair of honor between Bob Kapelke and Raymond Satter. Their scripted adaptation of the untold history of “Mr. Iceberg” was peppered with hilarity as they went on to recount the fabled episodes of “Ben the Gambler” and “Ben the Restaurateur.” The epic went so far as to prompt the talented Brenda Taylor to break into song. 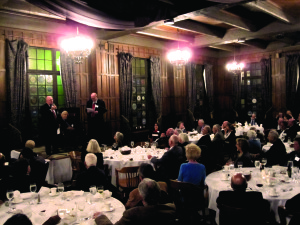 The distinguished “Defendant” takes a seat as the Roast commences.

The unanimous crescendo in applause ended in standing ovation style. While the event might have concluded as the clock struck 8:00 p.m., the spirit of camaraderie that Ben Aisenberg has cultivated among members of the Bar has proven itself to be timeless. D

Jessica A. Volz is a Communications & Marketing Specialist for the Colorado and Denver Bar Associations, as well as the Editor of The Docket. She holds a Ph.D. in English/Strategic Communications from the University of St. Andrews and a B.A./M.A. in European Studies and Journalism from Boston University. She can be reached at jvolz@cobar.org.