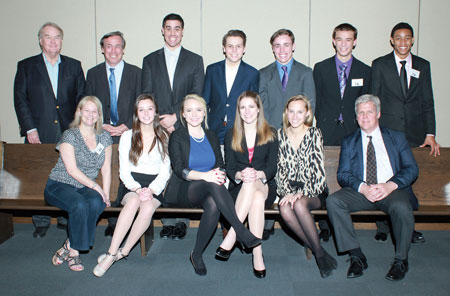 Over the past four years, Kent’s A-Team has won three Arapahoe County Regional Tournaments. The team finished second this year — losing by one point to its understudies on Kent’s B-Team. During the 2012, 2013 and 2014 State Tournaments, Kent’s A-Team finished fifth, sixth and fourth respectively. The 2014 fourth-place finish was particularly disappointing because the A-Team had earned the presiding judge’s award for the Best Performing Team in the State Tournament but had missed the opportunity to advance to the 2014 State Championship finals. The “Group of Nine” A-Team was therefore determined to win the 2015 State Championship. The student members practiced rigorously as soon as the CBA case plan was issued last November.

The Power of an Exemplary Work Ethic:

Kent’s Mock Trial Program is considered an extracurricular activity: No course credit is provided for participation. It is an entirely volunteer-based activity that is bolstered by the enthusiasm and commitment of students, volunteer coaches (many of whom are CBA members), teachers and parents.

The Group of Nine convened to practice every Sunday and Wednesday evening from November until the State Tournament four months later. The team also met informally to practice and scrimmage in the early hours of the morning before classes and during weekends. They collectively invested more than 1,000 hours in preparation for the State Tournament.

In late-March, the Group of Nine advanced to the 30th Annual State Tournament. The team that had worked so hard to accomplish its dream of bringing home the 2015 State Championship was, unbeknownst to them, mistakenly disqualified after the second round and removed to the consolation bracket for rounds three and four. Even so, at the end of the second round of the competition, the Group of Nine was one of only five undefeated teams: it ranked first in total points and second in terms of ballots won and point differential.

Taking the High Road: A True Measure of Professionalism:

Resilient. Instead of challenging the Tournament’s final results, Kent’s championship-caliber team met with CBA Mock Trial Committee members. They took the high road by requesting, in diplomatic fashion, an explanation of what had occurred. The discussion prompted substantive proposals regarding changes to the rules and procedures to prevent unfounded disqualifications from occurring in the future. D

Timothy M. Rastello is a trial lawyer from Boulder. He practiced as a partner/associate with Holland & Hart for 33 years and served as a coach for Kent Denver’s mock trial team during the past four years. He can be reached at tmrlaw1@gmail.com.

Since 1985, the Colorado Bar Association has sponsored the CBA High School Mock Trial Program. More than 100 high school teams participate. Hundreds of attorneys, judges, teachers and other community leaders volunteer their time to teach students about the judicial system and the trial process. Any Colorado high school, home school or community center program is welcome to participate. Students must be enrolled in grades 9-12 at the time of participation in the regional tournament. Each team must have at least one teacher/organizational sponsor and, ideally, one attorney coach. Teams having difficulty in finding an attorney coach may contact their local bar association and/or the CBA to assist in recruiting an attorney. For registration information, please visit coloradohighschoolmocktrial.com.