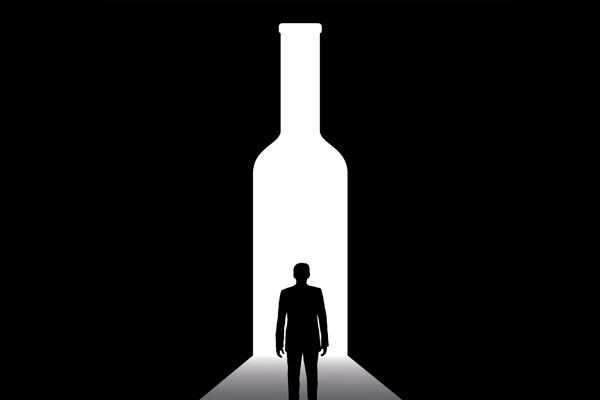 If wellness and professionalism go hand-in hand, then illness must be its antithesis. As an outwardly successful professional who struggled with alcohol abuse and the fear, shame, isolation, and loneliness that it engendered, I tell my story. If you get nothing else from this article, know that if you have an alcohol or substance abuse, or any compulsive or self-destructive concern, you’re not the only attorney in such a situation. The bad news is that it will continue to get worse. The good news is that you can get confidential help in a non-judgmental environment, maintain your practice, and obtain a solution without admitting anything to your employer or a regulatory agency. I’m no finger-pointer; I am just a person who was able to find his way out of “life’s falling apart faster than I can lower my standards.” You can too. I write this article from the perspective of alcohol abuse, but it applies to any substance use disorder.

Do I Have an Alcohol Problem?

I really knew it all along. In my job as an attorney, I had to maintain a security clearance. I’d draw meaningless distinctions between “alcoholic” and “one who occasionally drinks too much.” I would search the Internet to ensure that I was only the latter and to confirm that my clearance was not in jeopardy. I spent four days sober in the hospital for an unrelated condition without the DTs — positive proof that I wasn’t an alcoholic, right? I’d leave a shooter on the nightstand untouched. I drank as much as I wanted because I persuaded myself that I could quit. But deep inside I knew that I had a big problem. The increasingly double life that I led to hide my drinking was killing me. The exact label didn’t and doesn’t matter. Drinking adversely affected my life, both at work and at play. There is no such thing as a “functioning alcoholic.” Do you suspect a problem?

While I denied having a “problem,” in my small town, most everyone else knew I had one. I smelled of alcohol at the grocery store. I wobbled at Rotary picnics. I mumbled and repeated myself at parties. I slurred my speech at the community supper. I kicked a beer bottle in a movie theater during a quiet part. I looked disheveled. My wife (at the time) even scheduled a neurological exam suspecting organic brain disease. So, despite my self-deception, my alcohol abuse was an open secret.

What about My License?

“What about my license to practice law?” is a familiar and understandable concern among all attorneys facing a lonely substance abuse problem. “What if Attorney Regulation finds out I drink too much?” I worried about this too. But this question is off the mark. The right question to ask is, “What can I do to address my substance abuse?” My substance abuse — not the Colorado Supreme Court — presented the risk. Whatever you’ve done, whatever steaming pile you’ve stepped in, it will only get worse if you delay fixing it. That’s as close to a certainty as there is.

I worried that if Attorney Regulation were to find out about my problem, I would be left to exclaim, “There goes my livelihood, my profession and my passion!” I wondered how I would be able to practice law in a small town when everybody knew I had a substance abuse problem. Should I change my name? Should I move to Florida for a fresh start?

I ignored the problem until it got so bad that the law stepped in. Attorney Regulation and my employer were necessarily involved. When I could no longer ignore the problem because my professional identity was crumbling, I dealt with what I know to be the real issue: my alcohol abuse. I should not have waited, and neither should you. Seek professional help. Getting help shows you are taking responsibility for your actions. Find someone you trust. Be completely honest with her or him. Address the problem before it inevitably gets worse.

My second biggest fear was that people in my small rural community would find out that I had admitted that I had a problem — as though this were worse than my hiding it. “What if they hear my admission?” is the second biggest wrong question. As I later realized, they already knew, and for them the disconnect was my failure to do something about it. I failed in grand style. I was arrested twice on the same day for DUI, with my name appearing the following week twice in the local police blotter. One resident said it best: “That’s our Sam.” I had waited too long.

Living in a rural community is no bar to action. In the unlikely event you have anonymity to protect, you can remain anonymous in the quest for peace. You can contact a local practitioner who is covered by confidentiality. Call someone local for an out-of-town referral if you don’t want to be seen at a professional office. A local professional will understand. My point is: Do something. There’s a solution for everyone who wants one. In my town, alcohol abuse affects professionals just as it does all people. Those who seek help are rewarded, not shunned. You will be treated no differently. Whatever has happened, stop the clock now. Seek help. Get well. Fix what you can. Retain an attorney who knows how to work with Regulation Counsel and who will want you to succeed. An honest, confidential self-evaluation with professional help is the best first step — regardless of where you live.

After I was arrested, the sun rose the next day in my town. At least I think it did. I was over an hour away in jail. Once I admitted being an alcoholic to myself, my internal dissonance over drinking evaporated. There was no keeping that secret from myself anymore, and I immediately felt better for it.

When I returned home (on bail), life wasn’t so bad. People didn’t shun me. I thought I had a scarlet “A” on my chest, but other people did not seem to notice it. During the period when my driver’s license was suspended, my friends gave me rides. These people were supportive and non-judgmental; they went out of their way to be helpful and caring.

The Colorado Supreme Court gave me a chance to keep my license and prove that I was committed to being sober. I still am, two years later. As an attorney in a small town in my 31st year of practice, I was heavily involved in local affairs. I volunteered for all sorts of activities, and my ability to be an active member of the community remained unchanged. There was no whispering campaign. If anything, it was quite the opposite, as people had a fuller understanding of my character and who I was.

People are forgiving. As a decent human being who demonstrated a commitment to positive change, I am accepted in my community. People ask me for legal advice. They admire my willingness to be honest about my weaknesses and my work to overcome them. My town is not out of line or unusual in this regard.

Intuition might suggest that you’d find it easier to sober up in a large town and maintain a practice. Allow me to disagree. For me, the path to staying sober has been maintaining a congruent life, where who I am inwardly and outwardly are the same. That comes in part from not having to keep secrets. People here know I don’t drink, and I don’t have to put up with the common “oh, just have one.” I don’t have the temptation to go to a liquor store where no one will recognize me. Such a store doesn’t exist here. I don’t have the fear of disclosure or the idea of leading a double life. I’m not concerned that people will see my car parked at an AA meeting.

I hit my low in a small town. That meant there was nowhere else to go but up. I have no doubt that there are potential clients who won’t use me because intoxication was once my lifestyle. Many more will retain me because I am a competent, hardworking, and fully functional advisor and advocate. We don’t rub my past in each other’s faces. We all have rough patches. What separates the sheep from the goats is how we deal with them. People instinctively respect that. In a small town, there are few surprises. I think that benefits me in my practice.

Confronting substance abuse as a professional can be challenging and potentially humiliating. In my view, trying to keep it a secret only compounds the struggle and exacerbates the problem. After I sobered up, I found that my rural pre-existing support system, the lack of need to maintain secrecy any longer, and the generally understanding nature of the people in my town all contributed to a successful recovery and a satisfying professional life. I had no idea that living a sober life could be so rewarding!

It is beyond the scope of this article to outline tools for self-diagnosis. If you are experiencing a medical emergency, call 9-1-1 immediately. If you have a less pressing concern, please reach out to one or more of the following resources: Colorado Lawyer Assistance Program (COLAP), coloradolap.org; Colorado Lawyers Helping Lawyers (CLHL), clhl.org; the National Institute on Drug Abuse, drugabuse.gov; and the Substance Abuse and Mental Health Services Administration, samhsa.gov. Be careful about completing online questionnaires, as there may be no guarantee of confidentiality. D

Barbara Ezyk, executive director of the Colorado Lawyer Assistance Program (COLAP), is the coordinating editor of this new series of wellness articles. If you would like to suggest a topic or contribute a wellness article, contact Ezyk at bezyk@coloradolap.org.