In a Crisis of Faith God’s Grace is Enough

The first semester of my third-year in law school was accompanied by a crisis of faith. I had a momentary bout with amnesia. I forgot how I made it to the third-year, and for that reason I struggled. This past semester was marked by doubt. In my own eyes, it was one of the worst semesters I have had, and it was different than what I have heard third year was to be: I am definitely not bored to death. Third year was a struggle from the beginning because the clinic is a responsibility like none I have had in law school. Real client matters are pressing, like no other law school matters. Preparing to handle those matters required a different level of focus, a maximized level of preparation, and a grind that did not stop, day in and day out. There were times I hoped for a moment of rest and subsequent times I was let down.

There were times I did not put forth the highest quality work due to poor time management, and in those times I was hardest on myself. I would berate myself asking, “What gives?” and telling myself “You should be able to handle this.” And further questioning, “Why haven’t you learned how to do this by now?” The negative self-talk went on to say, “You keep up like this and you are going to be a terrible attorney.” That was the running commentary in my mind.

I was trying to be excellent by my own strength, and I was failing miserably. This past semester reminded me of a truth, the gravity of which I have not yet fully grasped: I am completely and utterly dependent on God for my strength, and apart from Christ I can produce nothing of value. As I stated above, the crises of faith and spiritual dilemma was marked by doubt. I was so obsessed with my personal inability to meet the set standard that I did not recognize or draw upon the strength imparted to me by the spirit of the living God within me.

This spiritual dilemma has its roots in pride, a pride that wants me to get credit for the positive outcomes that exist in my life. Arrogance about the value of my personal contribution that I can trace back to a class I took while I was an undergrad. It was one of the best classes I had ever taken. It forced me out of my comfort zone and asked me to look at the world from an entirely new perspective. This class challenged my faith so strongly that I almost lost my faith all together. Ultimately, however, my faith was made stronger. My professor asked the class not to mention anything we could not document with scientific, empirically backed data in the classroom. Any discussion of faith or God was essentially off limits. We ventured to explain various aspects of worldly phenomenon (especially the concept of white supremacy and the institutions that help bolster it) through a lens that made individual human effort the only force that made a difference to what was recorded in the annals of human history. This worldview was something that my Christian upbringing initially balked at. But as the semester went on, my desire to do well in the course motivated me to seriously engage with the proposition. When I engaged, I could see how religion could be used to manipulate masses of people into subservience and submission. That was my senior year of undergraduate school, and at that point, I wanted nothing to do with Christianity or religion. I did not want to continue subjecting myself to what, at the time, I believed had manipulated my people into an enslaved state of being. So I sought spiritual liberation.

I read widely and experimented thoroughly. I thought about atheism but couldn’t fathom an existence where there was no higher power. At that moment in my exploration, I decided I was agnostic, and that the higher power was unknowable. I thought of myself like Piscine Molitor Patel in the Life of Pi: A practitioner of all religions who had found the truth (that truth being that there was no truth or that all truths were equally truthful). It was in this agnostic phase that another truth called me into the light.

It was during my agnostic phase that I found myself struggling to overcome some destructive habits that caused major problems in earlier stages of life. The shackles of those old habits did not begin to go away until I found Christ. I had tried to will the bad habits away time and time again, but they would not leave until I found Christ. But once I did find Christ, I started to see the world and how I fit into it more clearly. I looked back at the path I’d walked and realized the times my life could have ended up for the worse. I realized I was saved because of Christ’s grace and finally understood that my life had a purpose. And that purpose could not be understood or pursued apart from Christ. Somewhere early in the first semester of my third year, I lost sight.

I reverted to thinking that my individual effort was the only solution to the problems I faced. That if I wanted a way out of my situation I would have to find it or make it. I am glad that I realize I was dead wrong.

Propaganda’s song, “Crimson Cord,” has lyrics that illuminate the reason for my faith:

“The pain that guides us, the strings that tie us, the coincidence that proves to us God’s existence, joy we misplaced, beautiful mistakes, the scarlet thread, the crimson cord.”

Over this past semester I have had my fair share of pain, sorrow, and mistakes, but through it all, there have been those coincidences that affirm for me that God does exist and he is working everything out for my good.

One such coincidence happened mid-semester when I was at a very low point. There was a deadline looming very near for my client work in the Community Economic Development Clini,c and I was in the early stages of prepping my case for the Hoffman cup. At this point, the clinic felt like more work than I could bear, and my fiancé and I were facing financial difficulties due to unforeseen wedding expenses and hasty decisions made to cover those expenses. It was at this very moment that God took an act that some individual meant for harm and turned it around for good. This transformed bad act was an extension of God’s grace.

It happened on a Friday morning. The most interesting thing about the situation was the way that God prepared me for the blow. I got a text telling me to listen to Travis Greene’s newly released EP, “Intentional,” from my good friend who is currently in law school in North Carolina. I got that text a few moments before I discovered that my car was stolen. I’m glad I listened to the EP because it prepared my spirit and my attitude for what was to come. The EP intentional essentially puts the concept found in Romans 8:28 (that in all things God works for the good of those who love [Christ], who have been called according to [Christ’s] purpose) to music. Because of that preparation I was able to approach the situation relatively calmly, understanding that everything happens for a reason. Looking back on the situation, I realize that the money I got from the insurance early in the semester helped cover essential expenses late stage in the semester. Without it, I would not have been able to pay my December rent. God saw a dilemma I would face well before I saw the dilemma and used an act that a thief meant for his or her selfish gain and used it to help me in my time of need. God extended grace to me by providing for me even after I made an unwise financial decision.

The above is just one example of the way that God has shown me he is sovereign and in control. I see the truth once again. When I don’t have the skills necessary to make it through a difficult situation on my own, when law school seems like it is too much to bear, I rediscover that God’s grace is enough. 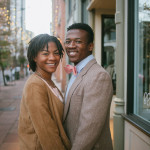 Shaquille Turner is a third year law student at the University of Denver Sturm College of Law. Shaquille is excited to be marrying the love of his life, Jhia Henderson, in August of 2016.