In late August, I saw that I had an incoming call from Washington, D.C. As someone who receives more than a fair share of spam calls, I let it ring a few times before deciding it was worth answering. Who knows? Our conversation began as a comedy of misunderstandings, with me thanking the caller for letting me know that I’d won an essay competition and letting him know that I would gladly attend the Supreme Court awards ceremony; I was already working there as an extern, anyway…

“As an extern? This semester?”

“Aren’t you a law student at Colorado Law?”

With that, the gravity of the call finally sank in. During the summer, I came across the Warren E. Burger Prize, a legal writing competition with an award ceremony at the Supreme Court, hosted by a justice of the Court. The subject matter initially threw me off. How does one write an interesting article about legal ethics when the solution is always to do the right thing?

But over the next few days, my mind repeatedly wandered back to the discussions we had in a legal ethics class with Professor Melissa Hart. Our discussion about Spaulding v. Zimmerman and the dilemma presented by immoral laws stuck out as especially promising for a Burger Prize submission. As I penned the first words to the essay, it quickly occurred to me that a topic of this size would hardly fit into a hundred-thousand-page book, let alone the ten-thousand-page essay submission.

Adding to this problem, and the distinct possibility that the question would be unanswerable, a quick overview of the previous Burger Prize winning papers revealed a curious lack of my peers among the authors. Law professors, practicing attorneys, fellows – a diverse set of people have received the Burger Prize, but apparently no law students were among them. 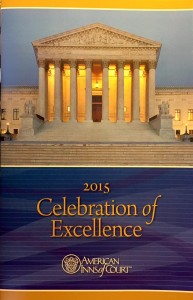 Still, Spaulding was on my mind. In Spaulding, the defense attorneys decided against revealing to the plaintiff the fact that the plaintiff suffered from a potentially life-threatening heart condition. After all, the rules of confidentiality at that time forbade the defense attorneys from making this disclosure without their client’s consent. The rules were later updated to prevent this scenario from recurring, but a fundamental problem remained – the Model Rules of Professional Responsibility continued to be rules that inflexibly dictated attorney conduct.

One solution would be to refashion those model rules into model presumptions, presumptions that attorneys had to consider in their acceptance or rejection of the presumption. My paper focused on this approach, and several months had passed between my submission and the phone call. To my surprise, the hardest part was yet to come: According to the caller, I had a five-minute inspirational speech to deliver to a room full of people. The last time I’d delivered an inspirational speech, I was 13 years old, and it was my bar mitzvah. The opening statements and closing arguments that I had practiced and practiced through mock trial and a jury trial through criminal/immigration defense clinic were a non-starter, as I had no evidence to discuss and no verdict to request in my speech.

After a few days of fiddling with a near-blank page, titled “Really Inspirational Speech,” I realized that it would be wise to learn from the master. With that in mind, over the next few weeks I watched and took notes on countless acceptance speeches from Oprah Winfrey. She began one speech with a quote from Maya Angelou (“I come as one, but I stand as 10,000), and it perfectly summed up what I intended to do with my speech – thank a handful of the 10,000 people who helped bring me to the Supreme Court.

The awards ceremony and dinner with Justice Ginsburg flew by in a blur, even after I had delivered my speech (exactly five minutes!) and calmed my nerves. To me, this awards ceremony represents the idea that we should never back down from a challenge because we are capable of more than we think. No law student had won the award before, but that’s no reason to believe that no law student could ever do so. If anything, it’s all the more reason to try and become the first law student recipient! I hope to draw on this attitude as I wrap up this last semester of law school, take the bar exam and hit the ground running in the practice of law. 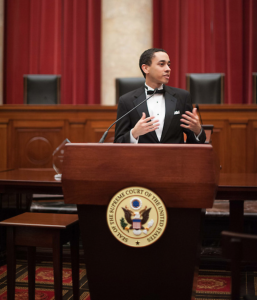 Gurney Pearsall at the 2015 American Inns of Court Celebration.

Thank you. I still remember speaking on the phone with someone from the American Inns of Court, and of course I was so excited about receiving this award…

That is, until the very end of the call, when I was told, “By the way, we’d also like for you to deliver an inspirational speech to a room full of people.”

I wanted to ask, “Well, could I maybe write another essay instead?” But here I am. Prepare to be inspired, I guess.

In a poem, Maya Angelou writes, “I come as one, but I stand with 10,000.” I would be the first to agree that while I’ve come to this podium alone, I cannot accept this award on my behalf alone. I have a long list of people to thank.

To start, I’d like to extend a very big thanks to the American Inns of Court for the Warren E. Burger Prize, for encouraging attorneys, professors and judges, as well as the occasional law student, to tackle the ethical questions that challenge our profession today

The Warren E. Burger Prize, like every other award here today, is about hard work and opportunity. In a recent interview, Justice Ginsburg mentioned that when she grew up, she’d never seen a woman in the symphony-orchestras, except maybe to play the harp.

This ceremony exemplifies the power and promise of the American Dream, the idea that hard work and opportunity are the only things separating one person from another.

I’d like to thank Professor Derek Kiernan-Johnson at the Colorado University School of Law for teaching me everything I know about legal writing.

I’d like to thank Professor Melissa Hart, also at the CU School of Law, for the eye-opening discussions we had in her class on legal ethics. One of those discussions was about what attorneys should do when confronted with seemingly unethical laws.

That question stayed with me for many months, until I came across the Warren E. Burger Prize and decided to explore it further in an essay.

I’d like to thank Professor Ruth Bevan at Yeshiva University, for mentoring me throughout my undergraduate career and helping me focus my curiosity, and helping me develop the research and reasoning skills that brought me here today.

And I have my sister and Justice Allison H. Eid to thank, at the Colorado Supreme Court, for introducing me to the world of appellate litigation and high-intensity legal reasoning

From my externship with her, I saw in action the Talmudic proverbs that the wisest person is the person who learns from everyone, and that someone who is too shy to ask questions, will never learn.

Lastly, I’d like to thank my parents, most of all. If I stand here with 10,000 people, they would be the two people directly behind me.

They instilled within me the values that I think today’s celebration is all about, the idea that hard work and opportunity are the only things separating one person from another

My mother immigrated here as a political refugee from the Soviet Union. She came with one suitcase and $90 and wasn’t even allowed to bring the medical doctorate she’d published in the U.S.S.R.

She worked a number of jobs, studied for the medical exam despite her family’s insistence that it was hopeless for an immigrant, and got into medical school – again.

That’s where she met my dad, and everyone said it would be impossible for the two of them to get married and stay married.

But 25 years later, there they are, sitting over there – as you can see, happily married.

If not for my parents’ inspiration, I would have looked at the past winners of the Warren E. Burger Prize and said, “No law student has ever won this award, so … it’s hopeless for me.”

But with my parents’ attitude, instead I said, “No law student has ever won this award, so … I better hurry up.” Thank you.