The “Side Gig” series features DBA members who engage in extraordinary ventures when they are not practicing law. These lawyers are certain to inspire others to nurture their own passions and hobbies, even if they only have nights and weekends to devote to them. 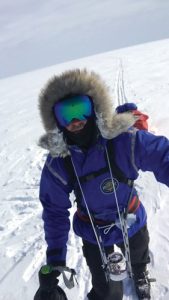 It is true that being a lawyer requires commitment. However, it can be easy to follow professional pursuits to the exclusion of those other interests that bring balance, joy and fulfillment to our lives. In this month’s “side gig” article, The Docket features Doug Tumminello, an attorney whose amazing “side gig” as an adventurer and explorer demonstrates that pursuing a legal career does not have to preclude the pursuit of other passions.

Doug Tumminello, a partner at Lewis Roca Rothgerber Christie LLP, is an outdoor adventurer and explorer at heart. He knew at an early age that he had a passion for adventuring. As a fourth grader, he was inspired by British polar explorer Ernest Shackleton, who is remembered for his famous expedition to the South Pole in which his ship, Endurance, became trapped in the ice. Shackleton and his crew had to abandon their ship and spend months camping on ice floes and on a remote polar island. Eventually, Shackleton and five crew members rowed more than 800 miles in open water to get help. The heroic rescue was successful, as not a single Endurance crew member lost his life. Shackleton’s adventurous spirit and leadership example inspired Tumminello to make exploration and adventure part of his own life story. 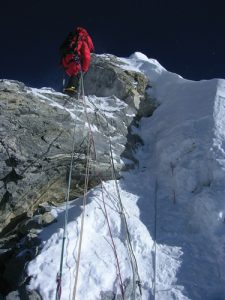 The early inspiration shines through in Tumminello’s extreme expeditions. In 2006, he led a team that scaled Mt. Everest via the Southeast Ridge. His original plan had been to climb another Himalayan peak, not Everest. However, a leader of an Everest summit team had to withdraw, and Tumminello stepped into the leadership role. After encountering great difficulties, including the death of two Sherpa teammates in an avalanche, his team reached the summit on May 23, 2006.

In 2009, Tumminello was on an eight-person crew that rowed 3,700 miles across the Indian Ocean from Western Australia to Mauritius. A 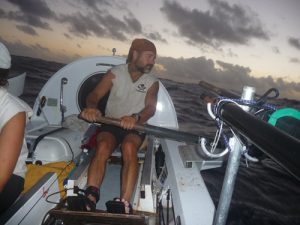 few days into the voyage, the crew encountered terrible storms, and the boat capsized. The crew was able to right the boat, but due to ocean currents and conditions, it was too late to turn back. The only option was to keep rowing in the direction of Mauritius. The crew was at sea for 58 days and, despite the setbacks, set the world record for the fastest row of the Indian Ocean.

Tumminello’s most recent adventure is an echo of Ernest Shackleton’s polar expedition. On December 6, 2015, he began a solo expedition trekking through Antarctica. His goal was to ski solo from the coast of Antarctica, at Hercules Inlet, to the South Pole — a distance of approximately 750 miles — in about 50 days. To accomplish this, he needed to ski approximately 12 nautical miles per day over bumpy terrain and achieve 9,000 feet of elevation gain, all while pulling a specialty sled (called a “pulk”) loaded with 225 pounds of gear.

During the trek, Tumminello frequently experienced whiteout conditions and heavy winds that made progress particularly challenging. But, quoting Shackleton, he maintained the view that “difficulties are just things to overcome.” Although he was skiing alone across the Antarctic landscape, he was supported remotely by a professional logistics crew. He also used a satellite phone, a satellite base station and other communication devices to keep in touch with the crew and his family. After about five weeks, for safety reasons and due to intense winds, heavy snow and a nagging foot injury, Tumminello decided to end his expedition before reaching the South Pole. Even so, he believes the journey was definitely worth it. To him, the obstacles that he experienced were not the defining moments of his journey. Rather, the obstacles led to and were in fact necessary steps toward attaining the many memorable moments 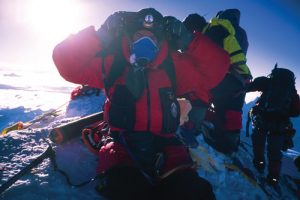 of his adventure. You can read more about his Antarctic adventure on his expedition blog at southpolesolo.com.

Although Tumminello’s accomplishments are quite remarkable, he does not get hung up on the often-asked question why he does these things. Instead, the more compelling question for him seems to be: “How am I going to accomplish the things that I am passionate about doing?” He acknowledges that the incredible support of his family and law partners has helped make extreme expeditions possible. He emphasizes that pursuing a personal passion as an attorney does not mean leading a dual life; he views his pursuits, both within and beyond the practice of law, as dimensions of the same life story.

Not everyone will summit peaks, row across oceans or visit Antarctica. However, everyone needs a personal outlet to refresh, re-energize and re-focus. Whatever your passions may be, Tumminello encourages attorneys to find a way to do what you love — as he says, “pick your passion, and strive to live it.” Amidst the many professional commitments that attorneys maintain, Doug Tumminello’s “side gig” adventures can remind us to foster the pursuits that fuel our personal fire, take advantage of opportunities as they come our way and live life to the fullest. D

Eden Rolland is a 2015 graduate of the University of Colorado Law School and is currently a Litigation Fellow at the Denver City Attorney’s Office. She can be reached at edenrolland@gmail.com.