Super Bowl parties have become a fixture in our country. Whether your team is playing in the game or not, getting together with friends or strangers at a bar to watch the game is part of our shared experience. When the Broncos played the Carolina Panthers in February, I watched the game from a very new perspective: in a sports bar in Santiago, Chile.

My wife and I spent three weeks in Chile beginning in late January, and as our schedule turned out, we were in Santiago at the start of our trip, where we watched the AFC Championship game between Denver and New England, and again just before we left Chile when the Super Bowl was played. For the Patriots game, we wandered into an American-owned sports bar, the California Cantina, in the upscale Santiago neighborhood of Providencia and had no trouble getting a table in front of one of the many TVs. Most of the people watching the game were Americans living in Santiago who had an interest in the outcome. The Patriots fans gravitated to the inside of the bar, and the Broncos fans were located on an outdoor patio. We instantly bonded with the Broncos faithful on the patio and shared beers with many other people decked out in orange. It was a great atmosphere in which to watch our team defeat Tom Brady and his band of despised Patriots.

The Super Bowl at the California Cantina was a very different experience. We stopped by the bar the day before the game and learned that we had to have a reservation. The manager found us a little spot at a table almost in a hallway, where we could sort of see one TV. When we arrived at game time on Sunday, the place was packed, and there was a line of people out the door and along the sidewalk, waiting to get in. We pushed to the front of the line, waved our reservation card, and got in, only to find someone sitting at our reserved table. The hostess called the owner over, and he told us that he had a better table on the rooftop patio. 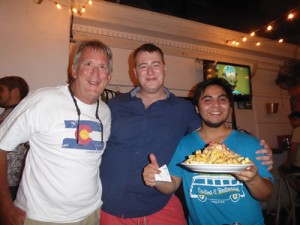 Once on the rooftop, it was easy to locate the Bronco fans in their orange Manning and Elway jerseys. In contrast to the AFC Championship, there were many more locals present; they had a limited understanding of American football and could care less who won the game. The Super Bowl is an international phenomenon, and people the world over are curious about it. A good comparison would be the type of attention that the World Cup finals get in the United States. People with only a passing interest in soccer will watch the game on TV — not because they are big fans but because it is an event of global significance. Such was the Super Bowl in Chile.

We were some of the few Americans on the patio and from Denver to boot, so the locals wanted to talk to us throughout the game. To spice things up, at the next table was a group of obviously inebriated guys from London who were in town for a wedding. They didn’t understand much of the game but led us in their soccer cheers whenever something good happened for the Broncos.

The game was broadcast in Spanish, and we learned a lot of football terms in that language. Just like the crowd at home, we shouted incompleta whenever a Panthers pass failed and cheered Von Miller and DeMarcus Ware on every time they managed a captura (a sack). When a flag was thrown, we wondered who would get the castigo. Would the Broncos lose five yards for a movimiento falso (false start)? And at the end of each half, we could relax and catch our breath when the clock stopped for la pausa de los dos minutos.

By the third quarter, the crowd had thinned substantially. People who were there only out of curiosity or general interest headed home, either because the game took too long (one Chilean couldn’t believe there was a concert in the middle of the game), or perhaps because it was late and they had to work in the morning. After all, the contest did not start until 8:30 p.m. local time. Those who remained were the real fans, and they shared the emotional highs and lows of the game with us until the Broncos finally pulled away for the victory.

We could not have asked for a more fun or culturally diverse atmosphere in which to watch the Super Bowl. We were able to share the experience with some delightful new friends. We saw an American institution from a different perspective, our Spanish language abilities were enhanced by a healthy workout and it didn’t hurt that the Broncos won the game. D 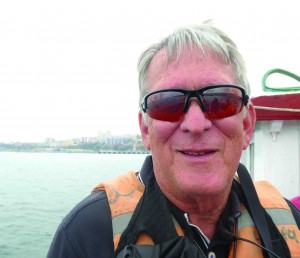