The National Western Stock show is this month.

What does that have to do with “The Docket?” Well it just so happens that one of our very own is on the Junior Livestock Committee and a member of the National Western Stock Show Association. Jennifer Holt is a DBA member, Special Counsel at Gutterman Griffiths PC — and a rodeo enthusiast.

Holt grew up riding horses in Northwestern Colorado. She moved to Boulder to attend the University of Colorado, but after two-and-a-half years she decided to take a sabbatical to “be a ski bum.” After returning to Denver to complete her undergrad degree, she attended law school at the University of Denver.

“I either wanted to be a psychiatrist or an attorney and I got D’s in chemistry,” Holt laughs. “I dropped the class before the end of the semester, so I couldn’t go to med school.”

And so her fate as a lawyer was sealed. After graduating from DU, Holt began her career at Bayer, Carey and McGee learning family law. She stayed there until the summer of ’86, and then opened her own practice—which she ran for several decades, until this past June.

Although she enjoyed the private practice experience, Holt notes that there was one major deciding factor when it came to making the change and taking the Special Counsel position at Gutterman Griffiths last summer: “the ability to simply practice law without having to worry about office management.”

Holt says she is lucky to have found such a great group to work with after leaving her solo practice,and she has finally discovered the right career balance at Gutterman Griffiths family law firm.

While Holt didn’t necessarily seek out the family law niche, she does truly enjoy it. Her favorite case story thus far is helping a mother collect more than $300,000 worth of past due child support.

“My passion is to get fair and equitable results for my clients,” Holt says.

An active participant in the bar association community, Holt is a member of the CBA Family Law Section and co-chair of the Legal Fee Arbitration Committee. She also serves as a Metro Volunteer Lawyer, providing free and low-cost civil legal service to low-income families in Denver. 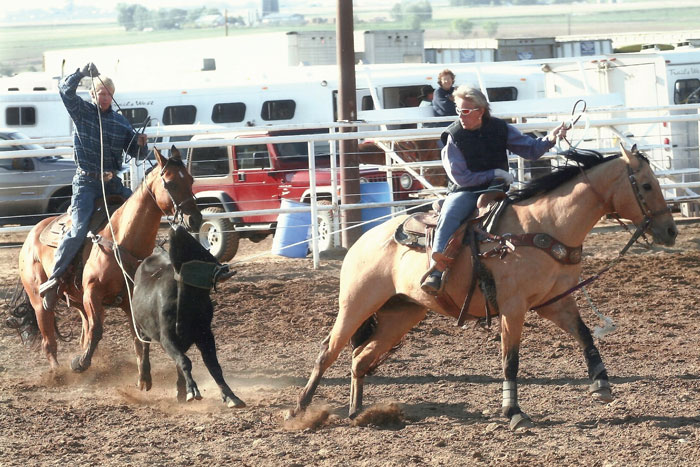 From the office to the bull pen

Even though Holt rode horses when she was younger, she didn’t start participating in rodeos until her 20s—when she simply decided she wanted to ride bulls instead.

That passion led to her involvement with the National Western Stock Show. It’s a year-round commitment, with a charity event every September to raise money for the 4H livestock judging teams from the nearby colleges. And, of course, Holt attends the big show every January. As part of her Junior Livestock Committee duty, she also helps the 4H kids sell their animals on the last Friday of each stock show.

Holt does not ride bulls anymore, but she does still jackpot team rope in the summer and participates in an indoor team roping club each winter.

Even an event as thrilling as the rodeo doesn’t completely fulfill Holt’s need for adventure, however; she recently came back from a hunting trip in Africa with her husband. She cites hunting and farming as two of her favorite things to do—when she isn’t practicing law, that is.

If you weren’t a lawyer, you’d: Be a hunting guide. Or a ranch hand.
Describe yourself in 3 words: Adventurous. Self-Sufficient. Cowboy.
Favorite place you’ve traveled to? Africa
Advice you’d give to recent law school graduates: “You can represent your client’s interest while still being courteous.”