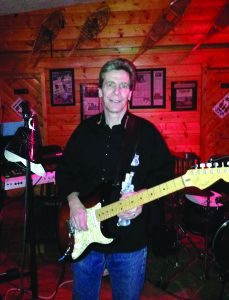 For Denver attorney Dan Sweetser, playing music has been a hobby and a stress reliever since he was twelve. Growing up in the 60s and 70s, Sweetser says that the Beatles had a huge influence on him, and the music from those days has largely stuck with him. He even guests in a Grateful Dead cover band whenever he gets the chance.

These days, however, he is also busy running The Sweetser Law Firm, P. C., so he doesn’t always get to play when he wants to.

“I try to find as much time as I can to play—sometimes it works and sometimes it doesn’t,” Sweetser says. “In years past I would spend at least a little time every night playing, but now it’s more of a weekend warrior thing.”

Even though Sweetser doesn’t get to play as often as he likes, he still plays at three to four open mic nights per year, and owns eight guitars. He says that his hobby can get expensive; but that it’s a lot of fun and a great way to unwind.

Highlights of Sweetser’s jam sessions include playing New Year’s Eve shows at the legendary Pioneer Inn in Nederland, as a guest in the band Riff Raff.

“The last couple of New Year’s Eves have been a riot,” Sweetser says. “The bass player [from Riff Raff] owns the Pioneer Inn, which has a rich musical history from the Caribou Ranch recording studio days. Elton John and Chicago recorded there. Steven Stills, Dan Folgelberg and a lot of other folks would end up going down to the Pioneer Inn just to play when they weren’t recording.” Sweetser says that playing on the same stage where many such legendary musicians played is “unbelievable.”