“There are a lot of organizations you can sponsor, where you’re not exactly sure where the money is going. With Wheels of Justice, we know we’re going to help sick kids and fund cancer research, and that’s very meaningful. That’s why we do it.” 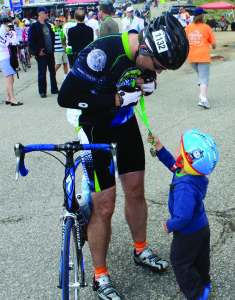 Aaron Bradford, a partner at Lathrop & Gage, has been involved with Wheels of Justice since its inception nearly nine years ago. The inspiring organization works to raise money for the Children’s Hospital Colorado by way of cycling teams and charitable sponsors.

To date, Wheels of Justice has raised more than $2 million for the Children’s Hospital Colorado. Its main event is the “Courage Classic,” a 156-mile bike race at Copper Mountain. The cycling is split between three days, with celebrations and parties throughout.

Bradford first got involved with Wheels of Justice when he was at Pryor Johnson, and the support continued when he joined Lathrop & Gage. Today, Lathrop & Gage is a leading sponsor, donating more than $50,000 to the team (plus another $75,000 from their client base!).

“It’s a rallying point in the office—a source of pride,” Bradford says. “Wheels of Justice brings everyone together, it gives us something to talk about and prepare for.”

Plus, when Lathrop & Gage first opened an office here (from its home base in Kansas City), Bradford’s involvement with Wheels of Justice provided a great way to break into the Denver community. The firm gained recognition for more than just its legal practice.

“As a sponsor, we’ve benefitted internally, externally with clients, and within the community,” Bradford says. “Now, when clients find out that we do this, their opinion softens a little about lawyers.”
Lathrop & Gage’s encouragement—and Bradford’s passion for fundraising—has certainly made an impact. Over the years, the firm has seen seven clients join as Wheels of Justice sponsors. And every year, five to ten people from the firm head up to Copper to participate in the Courage Classic.

Now that Wheels of Justice has surpassed the $2 million mark, it aims to expand its reach past the Denver community. Wheels of Justice wants to follow the lead of Children’s Hospital Colorado and grow into other cities around the state.

“What excites me about the future is that we have now captured the interest of people outside of the legal profession, and even outside Denver,” Bradford explains. “Wheels of Justice could have teams in Ft. Collins, Colorado Springs and Grand Junction doing training rides and raising money, then coming together in July for the Courage Classic.”

According to Bradford, the success of Wheels of Justice is largely due to its grass roots champions. As Wheels of Justice extends into other cities, it’s critical to have people step into leadership roles to campaign for the cause and spread it throughout the different communities. Current leaders and members are very open to new ideas on how to continue to make this team into an institution for the hospital.

“We’ve broken every record so far,” Bradford notes. “We want to see it thrive for years to come.”

Along with Lathrop & Gage, 2014 Wheels of Justice sponsors so far include: COPIC, Polsinelli, and Caplan and Earnest LLC.

By Courtney Gibb, the communications and marketing specialist for the Colorado and Denver Bar Associations and editor of The Docket. She can be reached at cgibb@cobar.org.