By the time you read this review, the Tom Hanks vehicle known as Bridge of Spies may be out on Pay-Per-View or Netflix. Rent it. 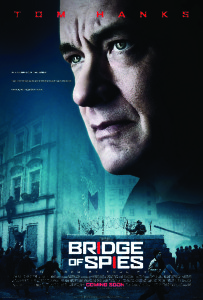 The movie is (a bit loosely) based on the true story of insurance defense lawyer James B. Donovan’s defense of accused Soviet spy Colonel Rudolf Abel in federal court in New York beginning in 1957. Appointed to the defense by a federal judge, Donovan met the highest ideals of our profession, not only by accepting the case but also by providing Col. Abel with a vigorous and very effective defense, despite incredible social and professional pressure to roll over.

In one taut exchange, Donovan meets with a CIA spy who attempts to pressure him to simply “go through the motions,” implying that the fix was in and that he could damage his career if he tried too hard.

For the record, here’s how the exchange went:

CIA guy: “come on, counsellor — there’s no Rule Book.”
Donovan: “You’re wrong. There is a Rule Book. You’re German, right? — I’m Irish. But we’re both Americans. What makes us Americans?”
CIA guy: [Puzzled look.]
Donovan: “Only one thing. The ‘Rule Book.’ It’s our Constitution. It is the reason we’re Americans.”

During Donovan’s first meeting with Abel, after he has reviewed the abundant evidence against the accused, the insurance defense lawyer tries to explain to his client the low odds of success. Alarmed that his client didn’t seem worried in the least, Donovan said, “Why aren’t you worried? You should be.” Abel, calm as ever, responded, “Would it help?” It was a powerful phrase he would utter throughout his ordeal.

Donovan defended Abel vigorously, all the way to the Supreme Court on a 4th Amendment issue (which, in today’s court, he’d have likely won). Ultimately, he failed, and Abel sat on death row, convicted of espionage and waiting to die. Donovan continued to work the case, meeting with acquaintances at the State Department and the CIA. (He served as counsel to its predecessor, the OSS, during the later stages of the war.) He finally managed to convince the feds that by keeping Abel alive, they could use him as a potential trade if one of their spies got pinched by the Soviets.

Abel had developed an admiring friendship with Donovan over the years, calling him “Stojici mozhi—,” or “The Standing Man.” He explained that when he was a child in his native Czechoslovakia, partisans attacked his village. Others hid from them, or worse, turned villagers in to the partisans. But one villager stood up to them, which cost him his life. Abel explained that after the partisan attacks, he revered this local hero whom he called “The Standing Man.” He saw that same sort of resolute determination and refusal to give in in Donovan. Donovan’s “stand” was not just for his client: It was for something he saw as far more important, yet far more fragile — the U.S. Constitution. Despite Cold War fears that bore down ferociously on him and his family, Donovan refused to be cowed. He returned to his practice, but fate had more in store for him than just his insurance defense clients.

In 1962, over the skies of the southern Soviet Union, CIA U-2 pilot Francis Gary Powers received the surprise of his life. At the time, U-2 pilots were under the impression that they flew so high that Soviet antiaircraft missiles could not reach them. Nonetheless, a missile did reach Mr. Powers’ spy plane, knocking it out of the sky. He ejected against orders and was captured by Soviet troops outside of Sverdlovsk. (U-2 pilots at the time were trained to go down with their aircraft if they crashed so that they would not survive to be interrogated.)

Almost immediately, the CIA began attempts to get him sprung. Since they could not do so publicly, or even officially, they turned to Donovan, a civilian whose ties to the Agency were in the distant past. They asked if he’d be willing to negotiate a trade. He agreed but could tell no one of the mission.

The movie turns from a legal drama to a taut spy thriller at this point. Hanks and Mark Rylance (who plays Abel) are perfectly suited to their roles. Donovan’s “defense lawyer” persona kicks into high gear during the multi-level negotiations that he has to manage, culminating in a dangerous visit behind the Iron Curtain in East Berlin. I’m not giving anything away by saying that he succeeded, even beyond the CIA’s hopes, as it’s a matter of public record. Of course, as a defense lawyer myself, I identified with Donovan throughout and tried to guess his next move during the course of the plot.

The movie is well-written, incredibly well-acted and grippingly shot. The “behind the Curtain” scenes will have you clutching the armrests. And be sure to stay for all of the credits — the crawl at the end is worth seeing, as it turns out that even his tour de force spy swap negotiation would not be the end of his work for the country. You’ll see what I mean.

If, like me, you like to be reminded from time to time why you became a lawyer in the first place, don’t miss this film. Your pride in your profession will be renewed. D

Doug McQuiston has specialized in civil litigation, complex tort, professional liability and insurance law for more than 34 years. He is a member, contributing writer and past chair of the Docket Committee. He can be reached at mcquisd@nationwide.com.