Something new is a-brewing in Denver. You may have heard about Lady Justice Brewing Company in the ABA Journal blog post “What would you name your legal brew?” or seen the Indiegogo crowdfunding campaign, which ran this past summer. Lady Justice Brewing (affectionately known as “Lady J”) was founded in Denver by three women (two of whom are lawyers) and will be a “philanthropic brewery” that donates all profits over essential costs. Founders Kate Power, Betsy Lay and Jen Cuesta invited me over to Jen’s Capitol Hill apartment to sample the beer and tell me about this new venture.

The three founders met through AmeriCorps while working at a youth outreach organization called PeaceJam in Arvada between 2009 and 2011. All three shared the hobby of home-brewing, and, as they worked together, they witnessed firsthand how non-profits struggle for money. Kate recalls, “We figured there had to be a better way to fundraise than making phone calls.”

The idea for Lady J was born one night over beers at Vine Street. Jen made the tipsy suggestion that maybe they could fundraise for non-profits by brewing beer. For a while, this idea remained just an idea. After their shared stint at PeaceJam, Jen and Kate both started law school at the University of Cincinnati and the University of Maine, respectively. Betsy took a position as the coordinator of academic affairs at the Iliff School of Theology.

But the idea lingered. In Kate’s 3L year, she began to study low-profit limited liability companies (L3Cs), a relatively new type of business entity that combines the legal and tax flexibility of a traditional LLC with the social benefits of a nonprofit organization. L3Cs must have a stated goal of performing a socially beneficial purpose, not maximizing income.Kate ultimately developed a business plan for an L3C that brewed beer and gave the profits after costs to non-profit organizations. “I started to realize, we really had something here.”

In the summer of 2014, after Jen and Kate graduated from law school, they started brewing together and figuring out plans to make this dream a reality. They all have day jobs but spend their evenings and weekends working on Lady J. This combination of beer and community service was a natural cohesion for them, and going into business together has gone smoothly. “Because we met through a job, we know how to work well together.” Betsy is the head brewer, Kate focuses on compliance issues and Jen on philanthropy. Kate has found her law degree to be particularly helpful when navigating the various zoning ordinances and the federal, state, county, and city approvals and permits required. “Each county has different zoning regulations that relate to brewing.” Colorado does not yet recognize L3C entities, so Lady Justice Brewing is incorporated in Maine. 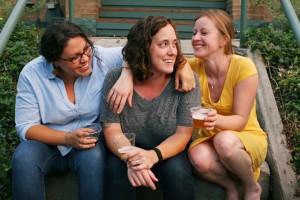 The founders have learned along the way that justice delayed is not always justice denied. Patience has been crucial to the success of Lady J. Betsy says, “A huge part of the process has been learning how to sit on something you’re really excited about until you’re ready.” As Kate puts it, “We wanted to start fundraising right away, but we didn’t even have a checking account.”

Before launching their fundraising campaign on Indiegogo in July 2015, they did their research by watching videos on other Indiegogo and Kickstarter campaigns to see what worked and what did not. “We needed something short, to the point and professional.” A friend who works for a local news station helped them make a video. To kick off the campaign, they hosted an evening with their “advocacy team” — a group of friends and family. They gave the team samples of beer and asked them to spread the word. The campaign’s stated goal was to raise $15,000. (They secretly hoped it would raise $17,500.) They ended up raising $18,595. Thus far, they have not needed a loan.

Lady J purchased its first piece of professional brewing equipment (nicknamed “Brew Hilda”) and plans to move into a commercial space in March. The founders have ignored advice to “start huge” and are instead focusing on realistic steps. “This is a labor of love. We are donating any profit over cost, so we want to take it slow and perfect each step,” says Jen. To begin, the commercial space will be reserved for brewing, but they may later expand to include a taproom. Brew Hilda is a 3-in-1 system, which will save time and money and serve as a nice transition between home brew and professional brew. The system can also be converted to a two-barrel system that would double their capacity for less than double the money.

The initial plan is to operate as a membership program, where members receive a six-pack each month. Similar to a CSA (community-supported agriculture), this will be a “CSB.” “As soon as we start selling, we will start donating” is their maxim. Their mission is to give grants to organizations that focus on the needs of women and girls. Down the road, they might also begin donating beer to charity fundraisers.

When the Indiegogo campaign first launched, Betsy did a radio interview to promote it. Rather than emphasize their philanthropic goals, the interviewer’s questions were focused on women in brewing. As far as the founders can tell, Lady J is the only brewery in Colorado that is founded 100 percent by women. While they are proud of this distinction, being a “woman brewery” is not what they want to be known for. “I wish it weren’t so surprising,” says Betsy. “We shouldn’t have a special classification, but we do.” Lady J wants to be known for its unique model of philanthropy. “By making philanthropy our goal, we are doing something new and different in a market that’s over-saturated.”

By the way, the beer was excellent! I got to try the “Better World Blonde” — a sweet but not-too-sweet strawberry blonde — and the “For the Record Stout,” which was smooth and chocolatey, with a hint of smokiness. The other beers in the works are the “Uh-oh Amber” and the “IPA that Jen Likes,” which is certain to appeal to those who are usually leery of hoppy IPAs. The CSB membership will be available starting in July 2016. You can learn more about Lady J at ladyjusticebrewing.com.

Cheers to Betsy, Jen and Kate for making the world a better place, one beer at a time! D

Emma Garrison is Staff Counsel at Wheeler Trigg O’Donnell LLP. She also co-chairs the DBA 15×15 Task Force, which develops strategies for increasing young lawyer membership in the bar association. She can be reached at garrison@wtotrial.com.

One Response to “Brewing up Justice ~ By Emma Garrison”