I. Their testimony lives on. What happened here must be remembered.

My wife Bobbie and I arrive at Sand Creek in Southeastern Colorado on the evening of the day before the 150th anniversary of the Sand Creek Massacre. A late November 2014 Western sky blazes scarlet. Riding into darkness on such a night, Col. John Chivington galloped Colorado’s Cavalry into a dawn attack, slaughtering at least 200 Arapaho and Cheyenne, mostly women, children, old men, and a few warriors trying to defend seven hundred persons from howitzers. 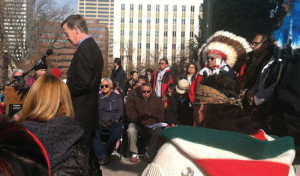 We chance upon descendants of Territorial Governor John Evans in the parking lot, Tom, Anne, and Laurel Hayden.  Another of his descendants, Caroline Goodwin, has written a poem petitioning forgiveness only victims may freely give:

Through the arms of cottonwood branches as night envelops us, we can see descendants of the Sand Creek victims igniting flashlights. They are setting up tipis so the voices of their ancestors sounding from this village for a century-and-a -half may rest now, in sacred ground.

II. 150 years later we fly the flags of those who peacefully assembled here.

All of the Denver metropolitan area used to be Arapaho land. Intermittent cottonwood would have been the only tree cover in these arroyos among the many undulating hills that dotted the high plains beneath the shining peak since named Evans. Ponies watered here. Smoke from pole-peaked tipis apprised incoming riders of this living place.

In March of 2014, Ernest House, Jr., a Ute Mountain Ute tribal member serving as Executive Director of Colorado’s Indian Commission, extended me an invitation on behalf of the Northern Arapaho of Wyoming, Northern Cheyenne of Montana, and Cheyenne and Arapaho of Oklahoma nations. Will you serve as a member of the Sand Creek Massacre Commemoration Commission? I check in with Chief Justice Nancy Rice. “Of course I will.” I call Ernest back. Governor John Hickenlooper appoints me.

One of the tribal representative descendants of 1864 victims at Sand Creek always welcomes us to Commission meetings. I don’t get to vote. Nobody does.  There aren’t any votes. All the business of preparing for late November’s healing run works through listening and head nods, person to person, tribal members speaking first. Matters requiring further consultation are simply continued. Every meeting opens with a prayer in Arapaho or Cheyenne punctuated by an English greeting. Al Addison, Sr. of the Northern Arapaho chairs the meetings. We go to Sand Creek for our June and September meetings, walk to the bluff overlooking the village site, watch as volunteers with metal-sounding devices locate Army spurs and Army bullets.

Methodist Bishop Elaine Stanovsky organizes fundraising.  Four days on the Smoky Hill trail into Denver the runners will require overnight lodging and hot meals the Sisters of Loretto will serve. It can be bitter in November. Colonel Chivington chose such a day in 1864 when Colorado Cavalry 100 day enlistees slaughtered the villagers. Governor John Evans two months earlier told the Peace Chiefs petitioning in Denver to assemble an encampment in Southeast Colorado outside of Fort Lyon for military protection.

III. The ground speaks the truth, the facts cry out.  A slaughter not a battle. 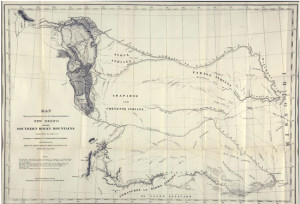 The Army will hunt down and kill all “hostiles,” Evans says.  He and Chivington are prominent Methodists running for Congress. Their theology? Clear the way for mining, farms, cities, and railroad routes. Evans is a pro-settlement infrastructure builder from Illinois. Like Abraham Lincoln who appointed him and ran for President on a platform to pass the Homestead Act, the Railroad Act, and the Land Grant College Act, all accomplished in the Union Congress of 1862. A Christian educator, he co-founds the University of Denver, a seminary. Colorado is applying for statehood based on its power as an emerging agricultural, mining, and commercial empire, Denver its centrifuge, The Queen City of The Plains.

Chief Justice John Marshall in the early 19th Century wrote for a unanimous U.S. Supreme Court that non-Indians could not go on Indian lands to possess any property interest, hunt for gold or plant a farm, unless the Indians had ceded to the United States those lands and the Congress opened up those lands for settlement and natural resource extraction.  Such treaties of cession included a standard provision requiring the United States to keep out miners and settlers, except as a particular treaty might provide. By the 1851 Fort Laramie Treaty, in return for passage through to the California and Oregon country, the United States promises to the Arapaho and Cheyenne secure possession of their homelands lying between the North Platte and Arkansas rivers. But gold is discovered in 1858 at the confluence of the Platte and the Cherry Creek, in the foothills, and in the Pike’s Peak country.  The “59ners” rush onto Arapaho and Cheyenne lands, miners, farmers, budding business people, and their families. Treasure seekers respect no boundaries; only the fever that burns red hot.

Chief Left Hand of the Southern Arapaho seeks to live at peace with these immigrants, who immediately begin to construct direct flow irrigation ditches into South Platte River Basin streams to grow food to feed miners. In February 1861, at the outset of the Civil War just before President Abraham Lincoln takes the oath of office, the Union Congress carves Colorado Territory out of parts of Nebraska, Kansas, New Mexico, and Utah Territories, to incorporate the entire possible gold-bearing region from Wyoming to New Mexico into a single stronghold for free soil anti-slavery settlement under the Homestead Act. To make way for the non-Native settlement of Colorado Territory, the 1861 Fort Wise Treaty shrinks the Arapaho and Cheyenne lands to a small reservation in Southeastern Colorado—where the Southern Cheyenne, since 1832, have allied themselves with Colorado’s first permanent white settler, William Bent, who marries the Cheyenne Arrow Keeper’s daughter, Owl Woman. To hold the gold against imminent Texas Confederate invasion, Coloradans led by John Chivington descend upon the rebel supply train at Glorieta Pass east of Santa Fe in 1862, burn all supplies, slaughter every single horse and mule.

For three and a half decades before Sand Creek, intermarried Native–Anglo families host the commerce of the prairies along the Santa Fe Trail at Bent’s Fort, just east of La Junta on the north side of the Arkansas, across the river from lands claimed by Mexico and Spain before it. All Indian land from Colorado and New Mexico to Arizona, Utah, Nevada, and California, it comes into the United States via other colonial powers, Spain and Mexico, through the 1846 war and the 1848 Treaty of Guadalupe Hidalgo. Lone Bear, a Cheyenne Medicine Man, fathers a daughter, Amache, who marries John Prowers, one of William Bent’s business associates. Lone Bear is also called One-Eye because he lost an eye defending the young William Bent against a Kiowa attacker.

IV. Conscience and courage were also at work that day.

The 100 day Colorado enlistees in the U.S. Army led by Chivington attack the village, even while it flies an American flag and a white flag. They cut down Cheyenne Peace Chief Lone Bear.  They cut down Cheyenne Peace Chief White Antelope as he stands in front of his lodge at Sand Creek singing his death song: “Nothing Lives Forever, Only the Earth and the Mountains.”  They cut down Arapaho Peace Chief Left Hand and so many others of the families of these descendants who will make a healing run to Denver from Sand Creek. Some scholars say Hitler admired U.S. Indian removal policy, modeled concentration camps on them.

They ferret out those who hide in sand banks, slice them up with bayonets, and parade these trophies through the streets of Denver. A handful of soldiers at Sand Creek resist. Captains Soule and Cramer instruct their men to stand down. Later they testify against the perpetrators of the Sand Creek Massacre before military and congressional investigatory commissions.  Chivington and Evans are never prosecuted for the murders at Sand Creek. In return for his testimony, Silas Soule is assassinated at 15th and Arapaho in downtown Denver.  Colorado loses its bid for statehood. All the plains tribes, their Peace Chiefs silenced by Sand Creek, rise up in a prolonged and doomed war against a nation to which they had already ceded much of their homeland. All Arapaho and Cheyenne are soon expelled from Colorado.

When the U.S. government relocated Japanese Americans to Colorado during World War II, Governor Ralph Carr welcomed them to Colorado, where the U.S. confined them near Lamar at Camp Amache, named for Peace Chief Lone Bear’s daughter, Cheyenne wife of John Prowers.  Wildly unpopular, standing on grounds founded in the constitutional rights of Japanese Americans, Ralph Carr lost his political career to Ed Johnson in a U.S. Senate race, and returned to his water law practice. The Colorado Supreme Court and Colorado Court of Appeals center in the Ralph Carr Judicial Center just across Lincoln Avenue from the Capitol. In the triangular apex of the court’s Learning Center, a statue of Ralph Carr faces the Capitol, which houses Colorado’s Governor and Legislature.

In the early 21st Century, the Arapaho and Cheyenne buy back the land where their ancestors were ambushed, and convey it to the National Park Service. They insist not one acre of private ground, land their ancestors were excluded from, land that was then thrown open for non-Native homesteading, will be condemned by the government. Cheyenne descendent U.S. Senator Ben Campbell of Colorado sponsors the Congressional legislation establishing the Sand Creek Massacre National Historic Site.  Superintended by Alexa Roberts, it is open to all, with honored ground reserved for remains of ancestors gathered back from museums and laboratories.

V. Assemble and see for yourself, how the young people will lead us forth.

Great-great grandchildren of the victims and the survivors, November 29 of each year, run for healing from Sand Creek to Denver, with many non-Natives who join them. They bear medicine bundles to Soule and Cramer at Riverside Cemetery and 15th and Arapaho, drums reverberating, Eagle feathers blessing them. They celebrate the Captains and their men for sparing many who would have perished but for fighters who would not fight.

They gather on the steps of Colorado’s capitol on December 3, 2014. Many others attend, along with members of the General Assembly and the Colorado Supreme Court. The master of ceremonies is Otto Braided Hair, a Northern Cheyenne.  Many Chiefs stand with him singing mourning songs, blessing songs.  The University of Denver has issued a report finding their founder Evans culpable. After consulting all living former Colorado Governors, Governor John Hickenlooper apologizes on behalf of Colorado. Welcome back, Arapaho and Cheyenne, to your homelands.

Justice Greg Hobbs has served on the Colorado Supreme Court for 19 years. The history of the native peoples of North, Central, and South America is among his lifelong interests.