“If you can’t explain it to a six-year-old, you don’t understand yourself.”

As trial lawyers, business lawyers, arbitrators, neutrals, advocates, counselors and teachers, we are regularly called upon to communicate effectively. By inference, we are also asked to communicate concisely. Concision in communication is now is expected by courts, jurors, boards of directors, client employees, commissions, regulatory agencies and so forth.

The demand for brevity finds roots in many aspects of modern life in which communication methods and approaches are significantly pared down. Whether this new form of brevity is a good idea is open to debate. Nonetheless, we need only look to Twitter, Instagram and other forms of social media as evidence of this change. Traditional print media organizations now often distribute short electronic summaries of stories. Examples include the “Breaking News” emails of the Los Angeles Times, the “Situation Reports” of Foreign Policy, The Atlantic’s “Atlantic Daily” and e.washingtonpost.

In addition to brevity is the gravitation toward simple visual presentations of ideas or visuals to grab attention. Infographics are commonly used to summarize complex information. An influential text in launching this trend was Edward Tufte’s The Visual Display of Quantitative Information. Since its publication in 1983, many others have followed on the subject of the more effective visual presentation of verbal information.

Of course, the search for simplicity is not new. The same concision is sought in legal writing where software can assist the drafter in achieving “plain English.”

For lawyers, tools aiding concision include persuasive diagrams and schematics, effective quotes, to-the-point statements of the case theme, and mind maps that simplify complex relationships. In an increasingly convoluted world, all of us can strive to simplify our points and even find ways to display them pictorially. It may serve us well to heed how other professions are communicating concisely and effectively, sooner rather than later. 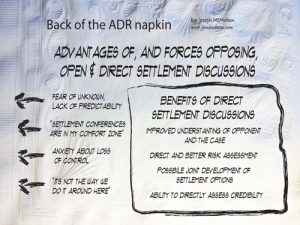 Joseph P. McMahon, Jr., P.E., J.D. works in mediation, facilitation, conflict transformation and dispute resolution, and has advanced degrees in law and the engineering. He practiced commercial law and litigation with a large law firm for approximately 25 years prior forming Collaborative Processes LLC. He also founded a small NGO which is conducting research on the extent to which intra-organizational conflict affects large international aid organizations. He can be reached at jpmcmahon@jpmcmahon.com.

One Response to “Can We Communicate Concisely? ~ By Joseph P. McMahon”