Incidents of attorneys being shot or assaulted by angry clients have a long history in this country, as the patched-over bullet holes in many courthouses can attest. Whether these attacks occur on the street (e.g., in front of the courthouse in Van Nuys, California in 2003), in a law office (e.g., during a mediation in Phoenix in 2013), in a high-rise complex (e.g., the 1993 rampage at 101 California Street in San Francisco), or in a Miami law office as recently as November 2, 2016, these events should give every lawyer and legal office staffer good reason to think more about workplace and personal security. School shootings have led to significant changes in school security awareness. Likewise, you should take past events where lawyers were attacked as your wake-up call.

It’s easy to fall back on what Hollywood security expert and author of the bestseller The Gift of Fear (1997) Gavin de Becker calls the “Myth of No Past Problems” — the theory that because yesterday was boring in the office, today will be boring as well. This can lead to blind spots when it comes to problematic clients: “Well, Mr. Jones was relatively cooperative during the last two depositions, so he’s probably going to be mostly cooperative for the deposition today.” This overlooks the fact that today, Mr. Jones feels hopeless, helpless and furious. He believes time is running out as he faces a financial loss that he feels is caused by you or your firm.

Safety in your office should not be judged just on the emotionality of the clients you have to see today but as an ongoing concern. You have a duty to protect yourself, your colleagues and your staff from harm by reading the warning signs of clients’ pre-attack behaviors, creating a more secure office environment, and setting better boundaries with current or former clients, who may switch from needy to belligerent. The following security approaches can improve the way you interact with difficult, entitled, and high-risk current or former clients:

Read the signs of future violence.

It sounds counterintuitive, but research from the United States Secret Service’s Protective Intelligence and Threat Assessment Investigations (1998) suggests we have more to be worried about from people who don’t threaten violence directly to the target than those who do. People who are the most dangerous often tell third-parties, such as co-workers or family members, about using violence — not the actual target. Don’t just focus on verbal threats; look for what you don’t hear. This includes body language that is seething and controlled (like a coiled snake) as opposed to visible or “all-or-nothing statements” that the person may say matter-of-factly or under his or her breath, like, “This isn’t over” or “You won’t like it the next time you see me.” These statements are more about posing a threat than making a threat. All threats are serious, but third-party threats are more likely to be carried out.

Prepare for high-risk meetings, depositions or mediations with security people and protocols.

In the courthouse, you can have some confidence that people who come into your space have been screened for firearms. In your office, it’s difficult to ask angry clients (from either side) to leave their bags, purses, backpacks or briefcases outside the meeting room. And even if they do, we won’t know a violent client is carrying a weapon until we suddenly see it. One novel approach for seemingly high-risk client meetings is to hire an armed female plainclothes private investigator to sit in. You can introduce her as an office staff member. This is much different than hiring a burly ex-cop who still looks like what he was and can raise the emotional temperature when the angry person guesses why he is there.

Train yourself and your staff in the “Big Three” for an active shooter in the building.

Today, the national emergency response protocol for an active shooter in a workplace environment is:

The City of Houston, in partnership with the Department of Homeland Security, created a six-minute Run-Hide-Fight video, which is useful to watch (readyhoustontx.gov).

Track the comments, actions, or behaviors of irrational or threatening current or former clients.

Pay attention to news stories and other accounts of antisocial behavior involving current or former clients. Don’t underestimate the accuracy of gossip. Scan the newspapers, talk to your colleagues and pay attention to your surroundings as you go through your daily home and work routines. Was this person just arrested for a drug, alcohol, weapons, trespassing, probation, parole or a TRO violation? Have they harassed other attorneys or their staff? Is there evidence of mental illness? Do you know of a “triggering event,” like a domestic violence arrest, divorce or a court decision against them? Have they just been fired or lost their benefits?

Two equations can help us understand how current or former clients can turn homicidal toward attorneys:

When angry current or former clients think you are responsible for all their current financial, legal, marital, and emotional problems, it helps to engage in security thinking on a daily basis. D 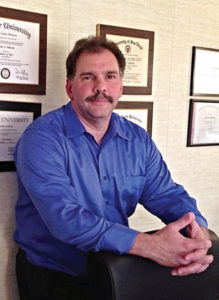 Dr. Steve Albrecht is based in Monument, Colorado and is internationally known for his writing, speaking, and training efforts in workplace violence prevention and high-risk HR and security issues. His 17 books include Ticking Bombs (1994), one of the first business books on workplace violence, which features his prison interview with a double murderer. He can be reached at