As remote places go, it is hard to beat Easter Island. Of course, this island off the coast of South America is not as inaccessible as the deepest parts of the Amazon River basin or the South Pole. Yet if you measure remoteness as the distance to the next airport, Easter Island (Isla de Pascua in Spanish or Rapa Nui in the indigenous language) would surely qualify. This 64-square-mile speck of land in the middle of the South Pacific is more than 1,000 miles from the next little speck of an island, 2,300 miles from the coast of Chile and 2,500 miles from the nearest airport to the west (in Tahiti).

Easter Island is a beautiful South Pacific paradise, with azure blue water, classic Polynesian culture and some of the sweetest people on earth. But given how far it is from anywhere, it is not a typical option for your next beach vacation. This is a place you really need to want to get to, and the reason you want to get there is to see the famous statues created by Polynesian people hundreds of years ago. 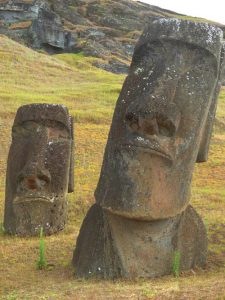 Everyone has probably seen photographs of the Easter Island statues, known as moai (pronounced moe-eye). But to be close to them is to marvel at their size. Moai are, on average, 13 feet high and weigh 13 tons; the largest ones measure 30 feet high and weigh more than 80 tons. Nearly 1,000 of these statues are scattered everywhere around the island. (There are even a few in the island’s only village of Hanga Roa). Half of these majestic structures were transported more than 10 miles from the volcano at which they were quarried to the shore. In addition to their size, the carved details of human anatomy are in many cases exquisite. And when you line up a large number of them with the blue Pacific as a backdrop (as they happen to be at the major archaeological site of Ahu Tongariki), it is one of those gripping travel experiences that simply can’t be duplicated elsewhere.

Archaeologists have pretty much figured out how the moai were carved out of the Rano Raraku volcano. At that site, one can see statues still embedded in the side of the mountain, abandoned in mid-creation. Many more moai are scattered around the island and are believed to have been left there when they were not successfully transported to the coast. The bigger mysteries revolve around why they were created and how these huge blocks of stone were moved to the coast and then placed upright on 150 ceremonial platforms known as ahu. There are no shortages when it comes to theories.

As to why the statues were created, it is likely that the moai involve some form of ancestor worship or constitute a status symbol for clan chiefs. Statuary is not uncommon in Polynesian cultures elsewhere in the Pacific, but the size and numbers of the Easter Island moai are unique. One theory posits that the bigger the statue, the more spiritual power that is gained by the chief.

More theories abound about how these massive pieces were moved from the quarry to the coast by a civilization that did not have draught animals or the wheel. The idea gaining the most current acceptance is that they were “walked” down paths as they stood, with ropes tied at key places and rocked down the highway in what is known as “the refrigerator method.” (Think of how one rocks a fridge from one edge to the other to move it along.) Others have proposed that they were slid along horizontally on wood sleds. You may still prefer the ever- popular theory that the moai were built and placed by space aliens.

Whatever position you take, the method of moving these huge monuments to the coast and placing them on top of the ahu platforms remains a marvel of ancient engineering.

All of the moai that made it to ahu were eventually toppled, either by rival clans during a civil war or by earthquakes and tsunamis. Many of today’s archeological sites feature fallen moai. The moai you now see standing on ahu have all been placed there relatively recently with the aid of modern technology. At the Rano Raraku quarry, you also see numerous moai heads which, as archeological diggings have recently revealed, are full-size statues buried in the ground up to the neck.

Rapa Nui is a small island, approximately 10 miles by 15 miles, and easy to get around in a rental car. (They don’t even ask to see your driver’s license; after all, where are you going to go with their vehicle?)

You have most archaeological sites pretty much to yourself. Given the limited number of tourists on the island, even the most popular areas seem placid and unhurried. Almost all of the archaeological sites are accessible by paved road, and you can see them in two or three days. However, a visitor who has come all this way will certainly want to spend at least four or five days, not just to marvel at the moai, but also to dine at tasty local eateries, drink a few pisco sours, soak up the warmth of the sun and become fully immersed in Polynesian culture. D 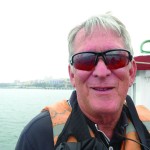