uring March, young attorneys from more than 60 law firms will lead the annual Associates Campaign to raise money for the Legal Aid Foundation of Colorado (LAF). Now in its 15th year, the Associates Campaign has proven extremely successful in building on the strong history of support for civil legal aid in Colorado.

LAF’s Mission
LAF was founded in 1981 in response to cuts to the Legal Services Corporation (LSC), the federally-funded entity that is tasked with providing operating funds to legal aid organizations throughout the nation, including Colorado Legal Services (CLS). LAF serves to bridge the widening funding gap between LSC funds and the need for legal aid. Its mission is to promote equal access to justice by raising funds to provide civil legal services for low-income people in Colorado.
LAF supports the critical and necessary work of CLS, the only program in Colorado that provides free civil legal aid to indigent people in every county of the state. CLS employs 55 attorneys in 13 offices across Colorado. In 2017, CLS handled over 7,000 cases on behalf of over 17,000 low-income Coloradans, and successfully obtained over $2 million in awards and benefits for its clients. Low-income and elderly clients in the greatest social and economic need are given priority. CLS’s focus is on legal issues that impact basic human needs, including food, shelter, utilities, necessary medical care, adequate income, and freedom from domestic violence and abuse. Accordingly, CLS provides legal advice and representation in the areas of family law and domestic violence, consumer rights and finance, housing, income maintenance and employment, health and individual rights.

The Friendly Competition
The Associates Campaign raises funds for LAF through a friendly competition among firms. The Campaign was the brainchild of lawyer Kenzo Kawanabe, now a partner with Davis Graham & Stubbs. Kawanabe started the Campaign in 2005 to build support for civil legal aid among young lawyers and to instill a habit of annual giving. He sought to take advantage of the competitive spirit alive and well among young lawyers by structuring the campaign as a friendly competition. In its first year, the competition included 10 firms and raised $8,861 from 125 donors. Since then, the Campaign has grown in the number of donors and amounts raised.
Associates at each participating firm attempt to out-fundraise associates at similarly-sized firms. Firms that raise the most money on a per capita basis earn “bragging rights” in their respective categories. Firms also receive recognition for 100 percent associate participation and for non-associate giving, among other recognition. Partners, special counsel, and staff can participate in the fundraising efforts and credit is meted out to firms accordingly. The standings are announced throughout the competition, which encourages further fundraising efforts within each firm.
Campaign Representatives at participating firms have developed creative ways to encourage their colleagues and co-workers to participate. Some firms contribute the funds from their office March Madness pools, while others offer casual dress days contingent on a donation. One firm created a life-sized cardboard photograph of one of the firm’s partners, and the photograph was placed in various employees’ offices until they “paid” a donation to have it removed. Whatever the fundraising strategy, the Campaign truly has put the “fun” back in fundraising. 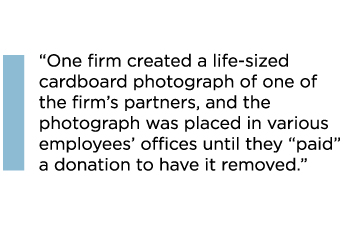 2018 Associates Campaign Sets Records
The 2018 Campaign was a smashing success. It raised a stunning $192,382.65 in just one month. Highlights from the record-setting 2018 Campaign include:
– 61 firms participated
– 1,323 individuals donated
– 37 firms achieved 100 percent associate participation
– 88.22 percent of the associates from participating firms donated

Looking Forward to 2019
This year’s Campaign is especially crucial given the current uncertainty of federal funding for legal aid. At this time, 40 percent of the annual budget for CLS comes from LSC. If federal funding for LSC is eliminated or cut significantly, civil legal services for the poor in Colorado will be dealt a crippling blow. This is even more daunting when the need for civil legal aid is considered. In 2017, LSC released a study, “The Justice Gap — Measuring the Unmet Civil Legal Needs of Low-Income Americans.”[www.lsc.gov/sites/default/files/images/TheJusticeGap-FullReport.pdf] The study demonstrated that low-income Americans receive no or inadequate professional legal help for 86 percent of their civil legal problems every year. [Id.] The study also demonstrated that legal aid offices across the nation have a problem similar to CLS — turning away potential clients with eligible civil legal problems due to a lack of resources. [Id.]
Despite all this, the good news is, you can help! We look forward to another record-setting Campaign in 2019, with your help. This March, find your nearest Associates Campaign Representative or visit www.legalaidfoundation.org to donate to the Associates Campaign. Please help us preserve and further the great tradition of supporting legal aid in Colorado! D
If your firm did not participate last year, there is still time to sign up for the 2019 Associates Campaign by contacting Kelly Bossley, Associate Director of the Legal Aid Foundation, at 303-863-9544 or kelly@legalaidfoundation.org.

Reagan Larkin is a Shareholder at Sweetbaum Sands Anderson PC, where she specializes in real estate and commercial litigation. She has been a member of the Associates Advisory Board since 2013 and served as her Firm’s Associates’ Campaign representative from 2013-2018.