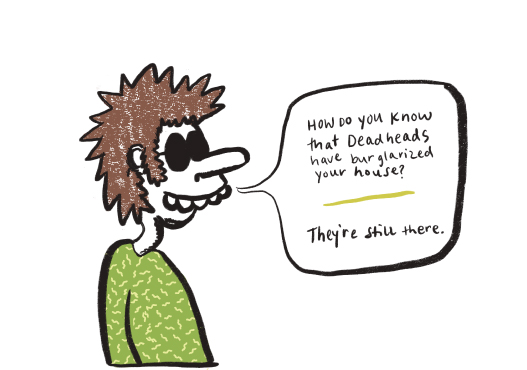 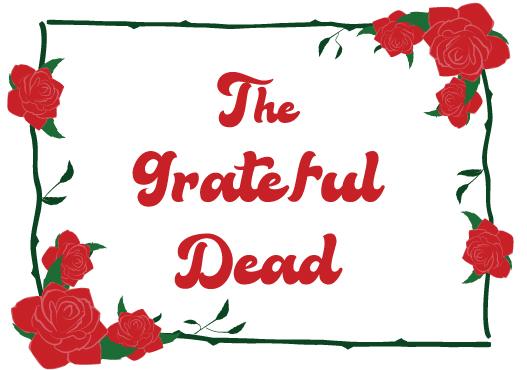 Returned to Denver in late November, full of the sound and spectacle, bread and circus, that has made them a cultural fixture with large segments of this country for roughly 30 years. At McNichoIs Arena, a third generation of Deadheads was getting its diapers changed in the aisles, while the second generation did its drugs and the first generation looked for the Maalox. 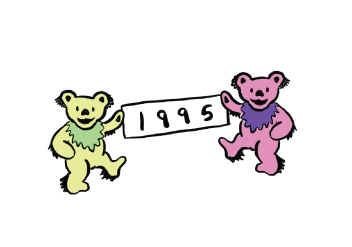 It wasn’t hard to spot the middle-aged first generation. Ponytails were attached to bald heads, the only acid in their systems was naturally produced in their stomachs, and they wore shoes. And though no one likes to admit it, there were quite a few lawyers in attendance.
People may wonder why a supposedly straitlaced bunch of people like lawyers would be represented at a Grateful Dead concert. The answer, known only to “deadicated” followers of the group, is that the Dead’s music and philosophy are highly geared toward the legal profession. Close attention to the lyrics of their songs (on CDs that is; close attention to lyrics is not a priority at the live concerts) reveals the constant inclusion of legal references.
For example, there is the Grateful Dead’s best-known song, Truckin. This song reads like a treatise on criminal law. At one point the singers explain the following scenario:

A clear problem in search and seizure, which is researched and analyzed in the next verse. I won’t spoil it for you by revealing the result, but it’s interesting to note the dissent in the Idaho Supreme Court case.

Later in this song, the Dead take us on a rocking exploration of another key area of criminal law. The problem is set up by these lyrics:

What are the issues, class? Entrapment, of course, but don’t forget the civil rights suit for harassment by law enforcement officers.
Well sure, I hear you say, this group knows all about criminal law. A good criminal lawyer could do very well in the traditional contest in which you walk through the parking lot before a concert and identify the number of state law and municipal ordinance violations (spot the greatest number and you can win a trip to Berkeley). But the legal scholarship of the Dead runs much deeper than that. In Friend of the Devil, the band analyzes two civil issues that lawyers often face. One verse contains the facts alleged in the complaint:

Obviously, the devil has a good collection, lawyer. It doesn’t sound like he left much room for an appeal.
Later in the song, this guy who does business with Lucifer has even worse legal problems than a $20 collection matter. Now he’s facing a paternity suit. But at least he has a decent defense, as is explained in this lyrical rendition of his answer:

Well, that may be a defense to the paternity action, but what about the adultery charge?
The Grateful Dead are not just interested in the theory of the law, however. Like your bar association, they concern themselves with the economics of the practice of law. In I Need A Miracle, the band considers the need of a former public defender for a steady source of business. The client this lawyer is searching for is described like this:

As the above examples demonstrate, these musicians, while hiding behind the guise of an outlaw band, actually spend their time unraveling problems that baffle other legal scholars, providing practical advice to the profession. No wonder lawyers can be seen at Grateful Dead concerts, hiding their paunches under tie-died shirts, calling teenagers “dude” and looking for a miracle.
It’s easy to spot them — they’re dancing in the aisles with lap-top computers, researching the songs on Westlaw. D 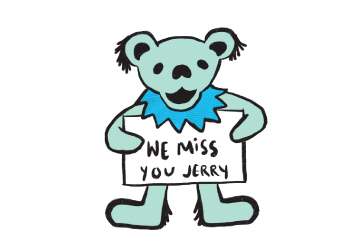