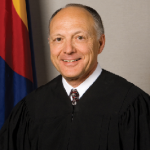 In this fireside chat, I interview Judge Russell Carparelli about the significance of civility in the practice of law. One of the things I always valued about my experience in the Army JAG Corps was that my opponents in the courtroom could still be my good friends outside the courtroom. It allowed us to develop a trust in each other that benefited our clients and created bonds that still exist today. As a former military judge advocate, Judge Carparelli brings a wealth of experience and knowledge on this topic. He graduated from the U.S. Air Force Academy, and attended the University of Denver for law school. He served as a judge advocate in the Air Force, then went into private practice doing commercial litigation. For the last 11 years, he has been on the bench at the Colorado Court of Appeals.

DAN: You’ve seen the law in many forms — from the civil/commercial practice side, the litigation side, and the military side. What was your experience like as a prosecutor and judge in the Air Force with the degree of civility among the military, defense counsel, prosecutors?

Things were really quite civil, partly because the military is itself a profession. And among military officers, incivility is contrary to professionalism. In addition, the community of lawyers was small, so you were consistently working with and working against the same people.

We also had a real respect for duty and mission. We had a respect that the defender’s duty was to use the law in every way to provide a fair defense for the accused and the prosecutor’s duty was to ensure that the accused was treated fairly and prosecuted fully and that you didn’t carelessly place someone in jeopardy.

When you shifted over to private practice and civil litigation, did you see any differences in the degree of civility that the practitioners afforded each other?

I handled some substantial cases against many lawyers and I did see the difference in civility. In one particularly hard-fought case, we were hammer and tong against one another. There were five defendants and each of them had separate counsel. There was one counsel on the other side of the case with whom we had a lot of conflict with at first. But eventually, we developed a real trust with one another, a mutual respect. With others, the conflict just never went away. It was very intense.

To what do you attribute some of that change — from what you saw in your military practice to the civil practice — as far as the degree of civility?

It’s hard to pin it down. I would say that the military profession and culture count for a lot — there’s the additional professionalism of the military. In the civil practice, I would say there are several factors. One is that the lawyers’ personal emotions get involved more.

Why is civility important?

Civility is important because we have to stay focused on what our role in the process is. As attorneys, we have to give our clients the benefit of the rule of law and all of the procedures and mechanisms that are available in the law.
If we can keep ourselves focused on that task, I think we’re better off. I think as we get more emotional and more impulsive, we’re more likely to make mistakes. I think that it’s stressful enough to do what we do without adding this interpersonal conflict to the stress.

As a professional, you need to bring your best skills to the task at hand; incivility is a distraction.

How does it harm or help the client for the attorney to act uncivilly toward your opponent?

By being uncivil, you are giving the client the wrong perception of what the process is about and you are discrediting the process and the profession.
When you are in an interpersonal conflict with the other lawyer, you’re going to get very little cooperation, which means everything is going to be harder to do, it’s going to take longer, and it’s going to cost the client more.

If you can develop an essential mutual respect and honesty, you can still fight hard and you can still avail your client of all the benefits of the law, but you’re not going to fight unnecessary fights.
Incivility is not only being rude in the sense of the way you talk to one another, but it’s also being obstructionist and doing things for the sake of obstruction alone. So the idea of denying a request for extension — just to inconvenience the other side — I think is a form of incivility.

To be persuasive, people have to trust what you say. If you develop a reputation for being obstructionist, uncivil, folks are not going to trust you. And so, you’re going to make it harder on yourself.
You can’t predict how things are going to happen in the future. For all of us who have been in the practice for a long time, it is surprising how years later you encounter the same people. And you either encounter them with a sense of mutual respect or you encounter them with a lack of respect — and that might be a situation that has an effect on your future, whether it is to join a law firm or to get a client, or to become a judge.

I’ve gotten referrals from other lawyers because they trusted my skill, but they also trusted my integrity. And would I have gotten those referrals if they didn’t? Of course not.

So, if you could tell our newer attorney readers, how does one acquire these skills to deal with the uncivil opponents and cope with those situations?

Well, the word you used there is critical: “skill.” It’s surprising that in law schools we have trial advocacy courses in which we try to help people understand the skills involved in direct and cross and closing, etc. For the transactional lawyers, we try to teach them the skills of writing. But we don’t particularly spend a lot of time on persuasion. And we don’t teach them anything about conflict and how to manage conflict, and yet, it’s inherent in the practice of law that you’re going to experience conflict.

Just as you can learn skills related to cross-examination, you can learn skills about managing conflict — about managing case conflict in terms of issues, but also in terms of interpersonal conflict. And you won’t become expert at them right away, but if you begin to learn those skills and you practice them, you will be quite surprised at how effective those skills can be.

So the point there is, young lawyers, there are skills to managing conflict. Be alert for opportunities to learn those skills!