“The legislature, presumably, is paramount among the lawmaking organs of the political state. Subject to the Constitution, when it propounds law, its pronouncement is supreme.” 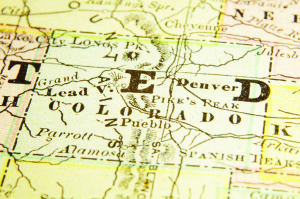 The history and creation of Colorado State legislation begins with the passage of an Act by Congress, approved on March 3, 1875, authorizing the people of the Colorado Territory to form a state government. This enabling act specified the requirements and timeline for compliance, primary of which was the drafting and adoption of a state constitution. Beginning on December 20, 1875, the thirty-nine convention members who were elected from the various territorial districts worked for eighty-seven days to create the document that was ratified by territorial voters on July 1, 1876. An engrossed copy of the Constitution of the State of Colorado and conforming legal materials were then delivered to U.S. Secretary of State Hamilton Fish, who certified their legality.

Shortly thereafter, Colorado was legally proclaimed the 38th State of the Union on August 1, 1876.

A constitution is the legal document that defines and establishes a government. It provides for, among other things, a continuing mechanism to enact, enforce and interpret state law.

Territorial ordinances and enabling acts are supplanted by state law once the territory is admitted as a State. Therefore, a new state must immediately convene its legislature to formally enact and officially publish its laws. This mechanism provides its citizens the greatest opportunity to show confidence in and support of the government and its laws. It also provides the Executive Branch general principles to enforce and the Judicial Branch something other than common law to interpret.

Colorado convened its first session of the General Assembly—the House of Representatives and the Senate—on November 1, 1876. The Assembly approved our state’s first laws on March 22, 1877, and the Colorado Secretary of State officially published them on June 15, 1877. They were printed by the Tribune Steam Printing House in Denver. This first compilation of laws, called General Laws of the State of Colorado, is like all those that have followed in several key ways: 1) it is arranged by subject and title, and annotated by section; 2) it is indicative of the continuation, amendment, or repeal of pre-existing law; and 3) it is paginated and indexed. Features of codification include “[t]he process of compiling, arranging, and systematizing the laws of a given jurisdiction,” these organizational tools provide efficient and reliable access to the large body of laws that are ever changing and otherwise difficult to search and use in everyday practice.

The General Laws also contained certain unpublished, albeit necessary, acts related to state business. For example, House Bill No. 1, approved November 7, 1876, provided for the appointment of electors to the Electoral College. The General Laws are unique in that they incorporate the original statutes enacted by the first General Assembly of the legislature. Beginning in 1879, Session Laws were published separately from the Code.

For reasons of practicality, many of the 1877 enactments were carryovers from Colorado Territorial Law. It wasn’t until 1883 that Colorado adopted its first code of primarily state law, the General Statutes of Colorado. That work was entrusted to the Honorable H.P.H. Bromwell, who initially prepared it for publication in 1881. However, too much editorial work remained undone at the time, and its adoption was delayed until the next general assembly in 1883. Bromwell’s arrangement and nomenclature established the framework that was used for compiling statutes in Colorado until 1973. His work was officially revised in 1908 in the form of the Revised Statutes of Colorado, and reauthorized for publication in 1921 as the Compiled Laws of Colorado.

Several facts are noteworthy about this period of time in relation to the publication and interpretation of Colorado legislation.

Colorado statutes were officially re-codified in 1935, as the Colorado Statutes Annotated, and every ten years between 1953 and 1973, as the Colorado Revised Statutes. Citation formats, as well as frequency and form of supplementation for these Codes, are outlined by Peggy Lewis and Matt Dawkins of the Office of Legislative Legal Services in their informative guide, “Researching Colorado Legislative History.”

Beginning in 1997, Colorado contracted to publish a codified version of its entire set of statutes annually in softbound volumes. The Colorado Bar Association published an excellent article on this subject in its Special Centennial Edition, and its authors, Douglas Brown and Charles Pike, were best qualified to speak on the subject by virtue of experience and expertise gained in their official capacities as Director of the Office of Legislative Legal Services and Revisor of Statutes, respectively. The official Colorado Revised Statutes are currently published by LexisNexis.

Today, the General Assembly meets from January to May, and publishes its enacted statutes in chronological format according to the sequence of their adoption in the Session Laws of Colorado. Currently published by LexisNexis under contract with the Office of Legislative Legal Services and the Revisor of Statutes, the Session Laws are compiled and printed for distribution each July. Should an error exist in the codified version of laws, the Session Law is controlling.

[The authors thank Jennifer Gilroy, Revisor of Statutes, for her generous edits to our articles on Colorado legislation.]