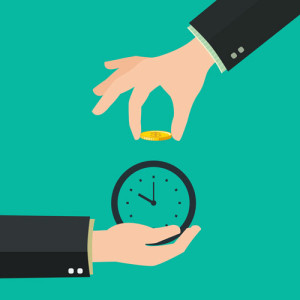 I recently finished renovating a home. The financial arrangement with my contractor was simple. After paying a deposit for the materials, I paid the contractor fixed amounts at pre-determined intervals upon the work’s completion. We even agreed up-front how the cost of unforeseen circumstances would be calculated. This was a classic flat fee arrangement. It provided both of us with the certainty that we needed.

As long as the fee is reasonable, any lawyer could enter into an identical relationship with a client. Nothing could be simpler. Unlike my contractor, few lawyers are willing to wait to be paid until after their work is completed. This is understandable. But let’s be clear: When the fee is paid and how it is calculated are two different considerations. A flat fee can be paid at any time.

Lawyers are typically given fees in advance to hold as a fiduciary that can be applied to payments as they come due under the fee arrangement. In some arrangements, the fee is based on the performance of some predetermined task or the passage of some unit of time. A lawyer is not entitled to these funds until they have been earned by performing an agreed-upon service or conferring a benefit. The lawyer owes fiduciary duties to segregate, safeguard and account for client funds. In addition, the lawyer’s fee must be reasonable under Colo. RPC 1.5(a).

Keith Lewis suggests that lawyers receive a lump sum in advance with no corresponding duty to refund any portion, regardless of the events of the representation. His complaint is not so much about flat fees as it is about other principles that govern the attorney-client relationship. If a client terminates his or her lawyer before the representation is complete, the lawyer may keep the funds, even if the lawyer made a disaster of the client’s case or treated the client unprofessionally. If the client perceives some unfairness in this arrangement, he or she may hire a second lawyer to sue the first, presumably after negotiating a reasonable fee agreement. Mr. Lewis calls this arrangement a “true flat fee.” He alleges, without evidence, that lawyers will not offer flat fees if they must return the unearned portion. He won’t offer a flat fee unless we reject all regulatory requirements and embrace the freedom of parties to contract for his commercially expedient “no refunds” alternative. However, lawyer and client don’t necessarily stand on equal footing, and fiduciary duties aren’t for sale.

Mr. Lewis argues that his proposal would “shift the risk of uncertainty” onto the client. It certainly would. Not only would this proposal allow the lawyer to forget his fiduciary duties and take fees before they were earned, it would also eliminate or, at the very least, completely reinterpret the requirement that all fees be reasonable. For instance, I could charge you the same flat fee to represent you, whether the case is dismissed before I answer or the matter leads to a week-long jury trial. But Mr. Lewis’ ideal of financial predictability can be achieved without such extreme results.

The current Rules allow considerable flexibility. For instance, engagement retainers, in which an attorney earns a reasonable sum upon receipt for taking the case and foregoing others, or for providing other consideration, are allowed. Mr. Lewis apparently isn’t aware of this; he isn’t the only one. Many lawyers don’t seem to realize that they may charge an engagement retainer as long as the fee statement explains the basis for earning the payment upon receipt. The lawyer must actually provide the consideration so described and keep the engagement retainer distinct from the fee for other services.

Additionally, one can easily divide many types of representation with benchmarks denoting stages where a reasonable portion of the fee has been earned. Granted, flat fees aren’t compatible with all types of representation, especially the litigation matter at the center of Mr. Lewis’ argument. The unpredictable nature of general civil litigation makes the up-front calculation of a lump-sum flat fee as inadvisable as quoting your client the odds of success. Flat fees work best in repetitive litigation situations and transactional representation (e.g., DUI defense, estate planning and debtor representation in Chapter 7 bankruptcy). While the time that you spend on any particular matter may vary, that does not mean that charging an identical fee is unreasonable under Colo. RPC 1.5(a).

If you are concerned about losing money by being terminated in-between benchmarks, use more benchmarks and keep them close together so that the amount you earn and therefore risk between them is not as great. The Matter of Gilbert, 346 P.3d 1018 (Colo. 2015), provides additional guidance to lawyers by allowing them to retain a portion of an advanced flat fee at termination prior to the completion of the representation based on the fair value of the services provided.

In less repetitive situations, such as the civil litigation matter to which Mr. Lewis alludes, consider the possibility of hybrid fee arrangements that combine flat, hourly and contingent fees in different ways to deliver services in a manner that enhances predictability for lawyer and client. For instance, an hourly agreement could incorporate flat fees for certain foreseeable tasks.

As Mr. Lewis points out, developing alternative fee arrangements is a critical access to justice issue. Contingent fees are the classic example of a fee structure that is intended to assist persons who might not otherwise be able to afford legal counsel. We all know that contingent fees must be reasonable and that compliance with Chapter 23.3, Rules Governing Contingent Fees is imperative if a fee is to be recovered, regardless of the social or commercial benefits of our fee agreement. Our professional responsibilities will not yield to a one-sided deal that is struck by a client who can’t afford a lawyer and bargains from a disadvantage.

We can succeed financially while operating within the framework of existing rules. I am not aware of any client who is clamoring for the opportunity to have an attorney keep money that hasn’t been earned. Likewise, I really do not understand how simply labeling flat fees “earned upon receipt” would improve access to justice. If access to the legal system for those of modest means were reduced to little more than a game of chance — you won’t know until the representation ends whether or not the fee that you are locked into was reasonable — our profession is failing the public. Mr. Lewis cites no evidence to suggest that these are the sort of flat fees that clients are “begging for.”

Mr. Lewis’ proposal sounds a lot like the credit industry, which shifts the risk of “uncertainty” (a synonym for “loss” in this instance) to those of modest means by charging higher interest rates to those who can afford them the least. The legal profession is a social institution, a cornerstone of our democratic society — not an engine of commerce. Access to justice is not credit: Reasonable fees are not commodities that belong only to those who can afford to bargain for them.

Charles (Chip) E. Mortimer received his undergraduate degree from Tufts University in 1983 and his J.D. from the College of William and Mary in Virginia in 1986. He was licensed to practice law in Colorado in 1986, and spent fourteen years in private practice, focusing on family, commercial and real estate litigation, before joining the Office of Attorney Regulation Counsel. Chip is now Deputy Regulation Counsel. He can be reached at c.mortimer@csc.state.co.us.