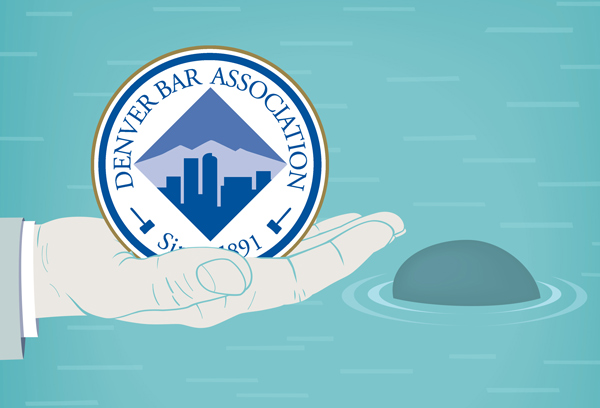 We were not privy to those conversations, the ones between Senator Charles W. Waterman and his wife Anna Rankin Waterman, but we can speculate what might have been said, or at least hinted at. The concept of the Denver Bar Association’s Waterman Fund must have been discussed, or it could have been something unsaid, but like a lot of issues between spouses, it was unerringly understood. Nevertheless, a fund of about $5 million now rests in Colorado “for the sole and only purpose of relieving the financial necessities, assuaging the hardships and lightening the financial burdens of aged, infirm or otherwise incapacitated members of the Colorado Bar, in good repute and standing, and who shall have practiced law in Colorado for a period of at least 10 years.”

Charles W. Waterman was a Vermont native who, after studying law in Michigan, became a successful Denver practitioner and United States senator. He maintained throughout his life an affinity and affection for his fellow Colorado lawyers, notwithstanding his and his wife’s decampment to Washington, DC. The story of Charles Waterman and his wife Anna Rankin Waterman was well told by Elizabeth Paul, a Denver lawyer, in an article published in The Colorado Lawyer in July of 2000. As the article reports, Senator Waterman earned the reputation of being “one of the best civil practitioners in the state”:

He is a man of liberal culture, broad-minded and of high ideals, has always been a great reader and student and many of his happiest hours are spent in his library in the companionship of men master minds of all ages. Because of the innate refinement of his nature he avoids everything common and finds his greatest pleasure in those things which are an intellectual stimulus and of cultural value.

Waterman’s practice brought him in close contact with the senior partner of the firm, Edward O. Wolcott, who just happened to be Colorado’s seventh United States senator. Getting a taste for politics, he organized Republicans in 1923 for Calvin Coolidge and was rewarded by the newly-elected president with an appointment as general counsel to the Oil Conservation Board in Washington, DC. Having begun to dabble in Washington politics, that ailment known as “Potomic Fever” gripped him, and he decided to run for the Senate seat from Colorado. Successful due to his outstanding reputation for law, foresight, business and judgment, he and Anna settled more permanently in DC. He quickly established a reputation there for “forensic skill, precision in argument and power in debate.” Regrettably, his full term would not be completed due to his declining heath. He died just three months before his six years was up on August 27, 1932.

Waterman’s will left the bulk of his estate to his wife. And here is where the picture has faded so much that we don’t know precisely what transpired between them. We know that Anna, on her deathbed in 1939, provided for a number of beneficiaries but directed that once all those beneficiaries died, the income from the trust thus established should go to the purposes set out above, to benefit Colorado lawyers. Was this Anna’s sole doing? Her husband’s will makes no mention of this kind of bequest, but it is hard to imagine that Anna’s directions were not somehow influenced by her husband and his legal career here in Colorado. Had they had acquaintances or colleagues who had fallen on hard times due to financial setbacks or heath issues? They clearly knew the cost and burdens relating to these challenges and sought to set up a fund to assist such persons in need. We simply won’t know the whole story, but reasonable speculation would suggest that this was, at least in part, a mutual goal.

In 1963, the last of the named beneficiaries died, and in the words of then DBA President William Cantwell, the trust “ripened.” He set up a committee (now known as the five “Waterman Administrators”) to effectuate the purposes spelled out in Anna’s will. Lou Isaacson (who was also a founding trustee of Rose Memorial Hospital) served as the first chair of that group and did so for more than 20 years. The trust has indeed “ripened” and is now worth more than $5 million. To seek a measure of how grateful recipients are, one need only recall that the widow of one recipient bequeathed $94,800 to the fund to thank the association for the assistance that her husband received during his bout with multiple sclerosis.

For the past half of a century, the Waterman Fund has been actively fulfilling the purposes expressed in Anna Waterman’s will. The original trust was administered by Riggs National Bank in Washington, DC, until the bank was purchased by PNC Bank. Five Waterman Fund administrators in Colorado, designated as officers of the DBA in compliance with the trust provisions, meet on a monthly basis to consider requests for support by needy attorneys who meet the standards enumerated in Anna Waterman’s will. Deliberations by the administrators are confidential, and the only people who know the identities of the recipients are those five and the DBA’s Director of Finance, Janet Bauer.

The five current administrators are Kevin McReynolds, Harry Arkin, Mary Jo Gross, Charles Turner and Richard Strauss. The Waterman Fund has been blessed over the years to have been administered by some of the most quintessentially competent professionals to have ever practiced law in our community: Liz Paul, David Erickson, John Castellano, Kathy Seidel, Roger Cisneros, Lenore Martinez, Connie Peterson, Sterling Ambler, Peter Nagel, Art Otten, Susan Harris and others.

The current administrators have achieved a significant change. Beginning many years ago, the Waterman Fund administrators began to perceive that the trust situs would be more appropriately located in Denver. Communication was problematic, and a local presence made more sense. So, efforts were undertaken to move the trust corpus to Colorado, where it could be administered locally. After much effort, in November 2015, PNC Bank agreed to transfer the trust to Colorado State Bank in Denver. This effort, begun under the passionate leadership of Art Otten, and then largely spearheaded by current Chairman Kevin McReynolds, also received substantial assistance from Jean Stewart, who gave good advice and put the administrators on to a DC lawyer who was instrumental in accomplishing this major change. As a result, the trust now resides at Colorado State Bank and Trust.

The Waterman Fund currently has an annual budget of more than $250,000 per year and is presently distributing almost $15,000 per month to qualifying Colorado lawyers. Over the years, it is estimated that nearly $5 million has been paid out in benefits. With the new trust arrangement, the administrators hope to increase the number of beneficiaries.

The Waterman Fund continues and will continue in perpetuity to give back. The Denver and larger Colorado legal community is grateful for Mrs. and Senator Waterman’s continuing contribution to the welfare of those Colorado attorneys who need a helping hand. D

Chuck Turner has been a Waterman Fund administrator for four years. He recently retired after 34 years as the executive director of the Colorado and Denver Bar Associations.

Richard Strauss has been in private practice since 1977. He is currently of counsel to the firm of Silver & DeBoskey, P.C. He has been a Waterman Fund administrator since 2014.