How often have you heard “the neighborhood will come back organically” or “revitalization will eventually happen”? These are phrases that people use when commenting on deterioration within their surrounding landscapes and the built environment.

Some people fantasize that a distressed community will come back to life on its own or that the “market forces” will drive the area back to renewal and growth. However, it takes a concerted effort on the part of our elected officials and residential stakeholders to create sustainable and thriving neighborhoods. Long-term neighborhood commitment, productive policymaking, research, study, strategic planning and a solid execution are essential. We are blessed to live in a city and a state where elected officials consult experts during the decision-making process, make appropriate staff appointments and understand the dynamics of building great communities.

Until I took the job of executive director of the Five Points Business District (FPBD), I did not truly understand the fragility of our city’s future and how much of it depends on the leaders we choose. If we make the wrong decisions when choosing our political leaders, we can spend the next generation trying to recover from detrimental outcomes.

FPBD is a non-profit organization primarily funded by a federal Community Development Block Grant from the Denver Office of Economic Development. FPBD represents a historic cultural district that is also a neighborhood business corridor. Our mission is to facilitate the growth and development of the district and the greater Five Points community.

The past four years have proven to me that it requires everyone from the federal, state and municipal levels to revitalize and sustain a neighborhood. Residents and property owners cannot do it alone. Still, it is the stakeholders’ passionate commitment to their community that drives redevelopment. The government provides the funding resources, structure and the planning to jumpstart the growth.

In 2016, we are counting over $300 million in development that is breaking ground over the next 18 months. Some people might say that we are experiencing overnight success. In reality, this new growth has been more than 25 years in the making. For many African Americans in this part of the country, this is a second renaissance for a neighborhood that is an intrinsic part of their cultural history. As proof, the 2016 Five Points Jazz Festival almost doubled the attendance records of previous years to reach 50,000.

Racial discrimination was alive and well from the 1860s to the 1960s for African Americans who settled in the West. When other immigrants, including the Italians, Irish and Jewish population, moved to Five Points and Curtis Park in the late 1890s and early 1900s, they were able to move out to the suburbs of Park Hill and Montview as they became upwardly mobile.

Moving to the suburbs was not an option for African Americans. When they came and settled in Five Points in the early 1900s, they did not have many options for moving to other parts of the city. They were restricted by discriminatory practices and, for the most part, could only have businesses along the Welton Corridor. There were exceptions, such as Barney Ford, the founder of downtown Denver’s Inter Ocean Hotel in 1873.

The premise for the designation of the Welton Corridor as a historic cultural district is grounded in the fact that African Americans found safety and freedom within its Five Points community for more than 40 years. As a result, the business, social and cultural scene thrived for African Americans from the ’20s through the ’60s.

After the passage of Civil Rights legislation, African Americans were able to migrate to other neighborhoods in Denver. Doors that were once closed to them because of the color of their skin began to open, and they were able to purchase mortgages outside of the Five Points area.

With the eventual loss of its key players, the Welton Corridor in Five Points started to decline in the sixties and seventies. The property owners there told me that previous elected officials had made promises to them that much-needed redevelopment would take place. They used the mantra of “if you build it, they will come.” However, the federal funding that was allocated to the distressed Five Points area never really made it to the Welton Corridor. As a result, the few futile attempts at giving loans to some businesses along the Welton Corridor did not actualize into a true recovery. We needed a vision, a plan and an execution strategy. 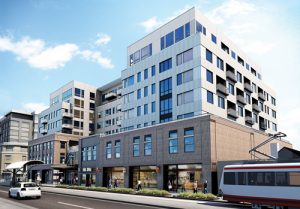 From the beginning, the Denver Office of Economic Development has been instrumental in working with the FPBD office to develop a strategy for growth and renewal. The State of Colorado also stepped in with grant money to fuel the strategic planning under the “Colorado Sustainable Main Street Initiative.” From all levels of government, the neighborhood was given support dollars and expertise to determine its vision.

The planning phase was endorsed by the community in November 2010, and the final Vision Plan report was published in January 2011. This plan was later rolled-up into the Northeast Downtown Neighborhoods Plan, which was later adopted by the Denver City Council in May 2011.

In 2011, Councilman Albus Books was elected and took a very active role in pushing the community’s plan for redevelopment as a member and then chairman of the Five Points Business District Board of Directors. OED proposed in 2013 a design challenge for the property owners on Welton as an incentive to develop the area. As a result of these efforts, we are experiencing new growth and activity — a renaissance for Five Points. D

Tracy Winchester is a graduate of Georgetown Law School and is the Executive Director of the Five Points Business District. She has served as a speaker for the Colorado Bar Association Leadership and Training Program (COBALT) and can be reached at tjwinchester@fivepointsbiz.org.